The world is in shambles. The last bastions of humanity fled to a naively idyllic city in the sky, vacating all responsibility of the chaos below. Those who remain below are the veterans of the Advertising War. 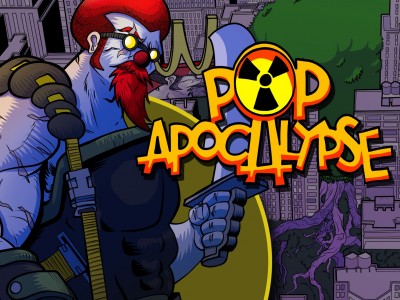 Don’t be fooled by the innocuous phrase, this was a real war fought by super-soldier mascots. Not the recognizable figures on cereal boxes and billboards, these are borderline deranged super-humans made by man, magic, and nature. It’s the Mad Max of trademarks. It’s Pop Apocalypse!

Pop Apocalypse is the first issue of the series written and drawn by Matt Harding. Harding currently self-publishes his comics via Kickstarter while also working for Madefire Studios and Pop Apocalypse shows Harding knows comics.

The characters are over-the-top, but believable. A masterful feat, these characters are realistic caricatures of themselves. An oxymoronic statement, but no other phrase works. The Clown, an oblique reference to Ronald McDonald, has murder in his eyes after being abandoned to die by his colleague the Burglar. Harding’s interpretations are psychotic while referential. The art mixes bright, cartoonish colors with gritty designs. Trix maybe for kids, but you don’t want to mess with the White Rabbit.

When I got to the last page, I was disappointed that there wasn’t more. I’m sold and the next issue can’t come soon enough for me. Harding quickly establishes the grisly setting and seedy undercurrents too. The winds of war are picking up and all those in the path will soon be swept away. This first issue explains the past war and its devastating results as well as setting the stage for the next conflict.

Currently the Burglar reigns king; however, the White Rabbit wants nothing more than to see himself on the throne. Each are gathering their arms and calling in favors. While factions are solidifying, the main character’s intentions are relatively unclear. It will be interesting to see in which ring he throws his hat.

The first issue I picked up at Emerald City Comic Con also included a section of guest artist character drawings. It was a wonderful addition to the comic as well as interesting to see other artists’ insane pop icons. Jonathan A La Mantia’s Mr. P-K.N.O.T. will give me nightmares for years. I don’t believe it was a variant issue, so everyone who purchases the first edition should be able to revel in the dark imaginations of the artists.

Pop Apocalypse lives up to its premise. Harding expertly combines cartoon grit with a demented reality. Breaking down the artificial, white-washed world of advertising, he created a hellish reality that mirrors the cut throat advertising business of the real world. Harding approaches mascots and pop culture icons as Moore treated superheroes in Watchmen.

Hopefully he releases the next issue soon or else I’m going to start attacking mascots to provoke the sequel.

DC Comics outlines books for the rest of the month