Apparently people really loved their PlayStation 2’s, as the second Sony console has been crowned the best of all time by Amazon shoppers. 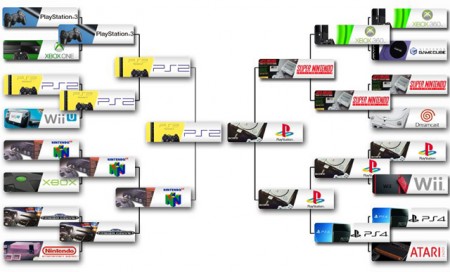 I… don’t agree with this little bracketing at all. Really. In the least… well, maybe some of it. I was a big PS2 guy, don’t get me wrong, but I was an even bigger PSOne fan. And those NES and Dreamcast placings are travesties, flat out. I suppose you could chock the choices up to the fact that there were probably a lot more younger gamers voting in this poll than seasoned vets, but still… I mean, the NES didn’t make it out of the first round! The NES!!

Oh well, at least the SNES put on a good show. If you’re wondering, and you’re probably not but I’m going to tell you anyway, it’s SNES, PSOne, NES, Xbox 360, N64 for me- in that order from first to last.

The voting took place from August 18th through October 5th (I had no idea it was even going on) and the bracketing represents the last stages of the contest, when most other consoles that had received votes (like the GameBoy) had been eliminated. For more on the vote, click here to check out a few interesting little tidbits on MCV.

Hellblade to get physical console edition, hitting this Holiday

Hey look, console footage of The Witcher 3 (now with more scaling on Xbox One)