Quantum & Woody meet the Nightmare Brigade, villains that combine spiders, clowns and needles into one big ball of horror. 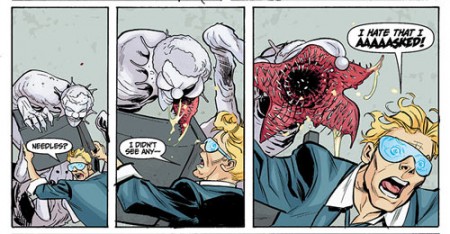 What scares you more than anything else you can imagine? WRONG. The answer is…the Nightmare Brigade! See what it takes to tear our boys apart – figuratively and literally – as Quantum and Woody fall into the clutches of the super-science abominations that want to dissect the source of their new powers quark by quark!

As you’ll see in the preview, The Nightmare Brigade is maybe the most horrific thing seen in comics this year. Writer James Asmus probably could have just stopped at ‘clowns’ though and these little creeps would have been just as terrifying.

Quantum and Woody #3 hits stands on September 4th from Asmus and artist Tom Fowler, with an alternate cover by Emanuela Lupacchino.

Digital comics on the way to the Nintendo Switch