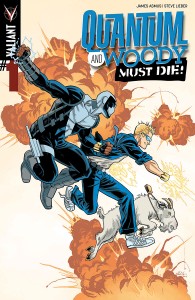 They came. They saw. They pissed off a whole lotta folks. And now a team of mystery vigilantes has singled out Quantum and Woody for complete and utter destruction. The first target: their minds! But who are all these all-new enemies? Are Quantum and Woody really in couples counseling? And, dear god, what have they done to the Goat? Is this real life? Or an elaborate deception? And just who – or what – is pulling the strings? When the dust settles only one thing will be certain – the world’s worst superhero team is dead meat!

Bet on the bad guys because the worst superhero duo on the streets are getting read their last rites – or are they?! – on January 28th in QUANTUM AND WOODY MUST DIE! #1 (of 4) – featuring covers by Mike Hawthorne (Deadpool), Johnnie Christmas (Sheltered), and Eisner Award winner Chip Zdarsky (Sex Criminals)!

Quantum and his brother Woody might be the world’s worst superhero team, but their books are anything but bad. Since the long-awaited duo debuted in the modern Valiant Universe last year, they’ve been embroiled in a mess of super-powered story lines that have really emphasized their incredibly dysfunctional nature. And yet, somehow, they just keep on keepin’ on… with Vincent Van Goat in tow of course.

Seeing the fallout from all those (mis)adventures, Quantum and Woody Must Die looks to be a good one. This mini-series sees some of the loose ends from the ongoing series semi-tied up and explores the aftermath of some of the more… interesting encounters that the pair have come up against. Of course, it also looks to be a fair bit of fun too, which is something that the duo is known for. If you’re into Q&W, you probably don’t want to miss out.

Quantum and Woody Must Die #1 (of 4) arrives on the shelves from the team of James Amsus and Steve Lieber on January 28th, 2015.

Britannia: We Who Are About to Die #1 (Comics) Preview