The World’s Worst Super Team gets a new apartment and whole lot of new problems. 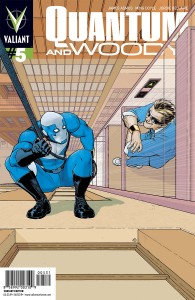 Imbued with unpredictable new superpowers in the wake of an energy experiment gone wrong, Eric and Woody Henderson have just had their lives turned upside down – and they need to “klang” together every 24 hours or else their atoms will disperse. So what do you do when the most annoying person in your life is also the only thing keeping you alive? You move in with him! And his goat. And his barely legal clone girlfriend. Besides, every team of heroes needs a secret headquarters…and this one has a slightly used hot tub. Plus: Quantum gets a job – and meets his first true blue super-villain!

Being basically tethered to someone like Woody is bad enough, but having to live with him would be downright horrible- though perfectly fitting with the tone of Q&W.

Not only does the duo (who don’t really get along all that well)  have to share an apartment, but Woody’s gal-pal and a goat who’s way more than he appears to be. And just might be the most dangerous goat alive… not that that’s all the difficult I imagine.

Quantum and Woody #5 is designed to be a jumping on point for what’s become one of Valiant Comics’ most loved series, and is a fresh break for the pair from the last storyline that saw them busting up a global ring of super-geniuses, mainly because of the goat.

The book drops onto racks on November 5th and if you’re into the pair now, I heartily suggest picking up an issue and trying it out. It’s easily one of the funniest comic on the shelves.