Get ready to leave the unfriendly confines of Father’s high-tech New Japan for something much worse, as Rai breaks free and heads to Earth. 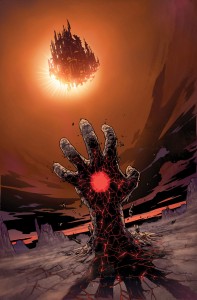 Valiant is proud to present an advance preview of RAI #9 – the FIRST ISSUE of “THE ORPHAN,” an all-new story arc from New York Times best-selling writer Matt Kindt (DIVINITY, THE VALIANT) and superstar artist Clayton Crain (Carnage)! The next visionary volume of the critically acclaimed series that has wowed fans and critics starts here on August 19th as Rai finds himself exiled from his homeland and must marshal the forces of our own ravaged planet to conquer Father’s kingdom once and for all!

Broken, beaten, and cast down to Earth, Rai and his allies now find themselves hunted, persecuted, and imprisoned for their failed rebellion against Father. Stranded thousands of miles from his former home, Rai is now more determined than ever to save his friends and bring down New Japan’s malevolent ruler once and for all…but how can he do that from Earth? And just what secrets will New Japan’s rising son discover as he journeys across the face of a planet scarred by his his nation’s ascent to the stars?

Oh is there some cool stuff happening here. Since the debut of his monthly book, Rai has learned the truth about the ‘benevolent’ AI that runs the floating nation of Japan in the far future of the Valiant universe. He’s also rebelled and fought against Father, the AI in question.

Now thrown free of New Japan he finds himself on Earth. As you can see in the official preview above, the planet was scarred by New Japan itself, but since the book launched we’ve also seen a glimpse of the Immortal Enemy and the Eternal Warrior’s battle in the far future, a battle that looked to have leveled much of Earth, and ended up with the Geomancer of that time traveling back to our time. Will that play in here now that Rai is Earth-bound?

We’ll see. Whatever it is though that befalls the futuristic hero and his allies, it’s going to look flat-out gorgeous thanks to the artwork of Clayton Crain. Holy cow does this book look pretty. I mean, yow. And with The Orphan starting off a brand new arc, if you haven’t gotten into Rai’s section of the Valiant U, now’s the time.