Starting the issue with the backstory of Babel promises to be a thrilling adventure in itself. Grab Rapture #3 and find out for yourself.

If you missed our coverage of #1, you can find that here

If you missed our coverage of #2, you can find that here 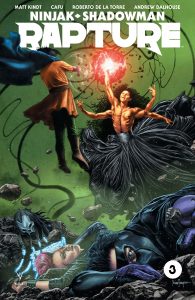 Babylonia, thousands of years ago. Babel is cast out from his tribe, being left for dead. When he was near the brink of death, Babel finds his first Loa, the mysteriously powerful creatures that reside in the world, hidden from sight.

A strange partnership was formed, when Babel rescued the Loa from enprisonment. Babel learned he could rescue and learn from the Loas in the world.

The Loa are beings between god and man, and now Babel had figured a way to harness them. To have them work for him. To build his dream.

Babel’s tower, assembled by the Loa, grew so tall that it pierced the heavens themselves. Babel intended on meeting his maker.
What Babel did not expect however, was to be met and denied upon arrival. Denied entry to the heavens, and cursed to walk the deadside for his transgressions.

When Babel meets Shadowman, Babel tells him that Shadowman can have his old life back. The chance to be rid of the curse of the Loa that he is carrying.

Ninjak and the others are trying to figure their way up the tower, amidst the mazes, including strange demonic guards. While Ninjak’s skills and Punk Mambo’s magics are ineffective in standing against the otherworldly guard, Tama comes up with a plan, while Rex decides to slice up the competition in his usual fashion. They don’t call him Rex the Razer for no reason.

Tama and company arrive atop the tower, to find Shadowman and other Loa strapped to the tower. Their energies being projected toward the skies. Contrary to what Ninjak and his friends think, Shadowman is doing this voluntarily. However, as to be expected, he has been mislead. What does Babel really have in store? We will have to wait until Rapture #4 to find out what is going on here.

Shadowman has been a tortured soul, and I can understand why he would want to be free of his curse. But trusting a being like Babel, that seems like too high a price to pay. At least for me. I am curious to see what Punk Mambo and Tama can do to steer this back in the right direction.

The Chant review — Can’t touch this