Rasputin. Man. Myth. Legend. Find out what brought this mischievous man to the side of Hitler ant the Third Reich, in RASPUTIN: THE VOICE OF THE DRAGON #1. 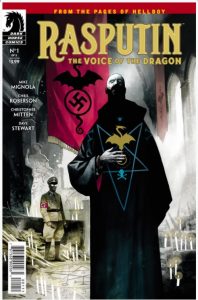 RASPUTIN: THE VOICE OF THE DRAGON #1

Everyone has heard stories of the mythical Rasputin. The man that needed to be killed several times before succombing to the reaper. As for the stories of Mike Mignola, we find ourselves in 1937. One of Hitler’s men finds the mad monk praying to the dragon for a sign. After some discussion of where and when the dragon had appeared throughout the years, the German man explains that the Third Reich will stand for a thousand years. The deal sounds enticing enough to catch the monk’s interest.

Every story needs two sides of the coin, and Rasputin is no different. Rasputin finds his antagonist in Trevor Bruttenholm. An academic and member of the British Paranormal Society, Bruttenholm found himself well versed in a great many things. He had found himself decoding messages during the war efforts, when strange details led him to investigate things outside the reach of his office.

Trevor finds himself in the village of Hartfordshire, where some foolery is afoot. Met by one of the villagers, we learn of what appears to be some grave robbery. Though this was no straight-forward robbery. There were multiple people, multiple languages, and talk of an eternal reward. 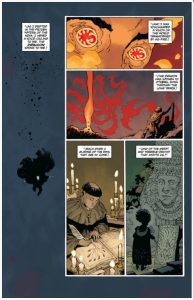 Trevor goes on to visit a relative, and learns about secret societies that have existed for ages, and of the stories of those who cross the societies. Some members are good people, while others are as foul as can be. The grave robbery seems to have ties to one of these societies in question, the Heliopic Brotherhood of Ra. We learn that the grave in question belongs to one of the premier members of the Brotherhood. But what good can come of such a robbery?

Bruttenholm has a way of not being swayed into giving up such a search. Rather than going back to his research, he made plans to stop off at the churchyard where the robbery took place. Bruttenholm was not content on simply relying on the stories of others. He had to see things for himself. Whether or not this did any good remains to be seen. After his pit-stop, his evening telling stories with an old friend come to a strange end. A mysterious being enters the pub, and we learn that Bruttenholm and his friend are far from finished with their investigations.

RASPUTIN: THE VOICE OF THE DRAGON #1 begins a story that we have all wondered about. We’ve seen the films, and read the comics. Some stories had yet to been detailed, and now we get to one that I’ve been curious about for some time. Hellboy and Bruttenholm were able to stop Rasputin in the film, but as we all know comics and Hollywood don’t always line up. How will Rasputin fare in the 20th Century?

RASPUTIN: THE VOICE OF THE DRAGON #1

Pioneers of Olive Town review — It’s time to get farming