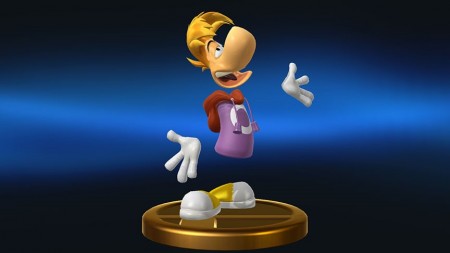 I wouldn’t have believed it if someone simply told me, but a major Ubisoft character has appeared in the form of a trophy via Smash. Things just keep getting more and more interesting for the latest entry in the Smash franchise. So what could this mean? Well, there is one possibility that I never considered, and that would be a character reveal tomorrow from a Ubisoft game. Yes, not only could we possibly have characters from Sega, Namco and Capcom appearing in Super Smash Bros, but also Ubisoft. This would be insane, especially considering Sakurai‘s comments about being apprehensive when it comes to third party characters in the game.

However, we have to consider the strong possibility that this could very well be the case. It’s strange that we’re getting this update mere hours before the inevitable character reveal. Nintendo could very well be teasing events to come. Now, there have been third party trophies before, such as Mr. Wright from Sim City; but a main character such as Rayman, and so shortly before a new challenger appears, that is unusual. First an announcement of the live stream event, then this trophy revelation, it could be a sign of things to come. Perhaps I’m reading too much into it, we’ll just have to wait and see tomorrow morning.

Games with Gold for October will bring I am Alive, Super Mega Baseball