Retrobooster is a cave-flyer reminiscent of the older bullet-hell games such as ‘Spacewar!’ and Galaxian. The game features a highly responsive ship that requires skill and practice to properly maneuver. The game is exceedingly difficult but that’s where the fun begins. 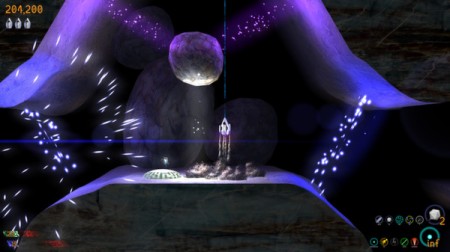 Retrobooster’s visuals look amazing. From the various maps and the menu design, down to the ship itself, everything seems like a tribute to the games of the glorious past. The game is independently made by developer Really Slick, and what’s so impressive is how incredible everything looks. Everything is designed to retro perfection and the maps actually reminded me of the older Duke Nukem backgrounds – which is good.

I felt that the enemies were also designed with the past in mind. And though I say retro, the game does still have a modern appeal to it, which is quite a feat to achieve. Retrobooster is a game that has its feet firmly planted in its retro roots, while at the same time keeping in mind the demand for a more modern game in this day and age.  The colors also look amazing and most of them feel like an updated hue from the games of the past (orange, blue and red are prominently used) and this made the experience even more fun, if not downright memorable.

Related Article:  South Park- The Stick of Truth delayed into 2014

I also enjoyed how the puzzles were laid out and how much of a pain they were to either navigate through or solve as you try to avoid enemy fire – or killing yourself by accidentally ramming your ship into a wall.

The game’s controls are deceptively simple, but that’s where the simplicity ends and the complex fun begins in Retrobooster. While your ship is controlled with a 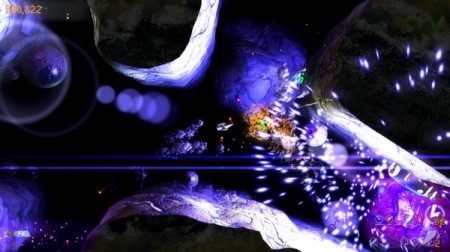 few keys, it takes skill and precision to accurately control the vessel that is used to navigate the harsh regions of space- and this only gets harder as the game progresses.

The ship takes damage from enemy fire as well as taking an appropriate amount of damage based on how hard your ship collides with a wall, an enemy or the floor – which is going to happen a lot given how excessively responsive the controls are. The game’s difficulty to master and the ship’s high learning curve adds to the replay value though, especially with competitive players who will refuse to take the beating of their ship standing down.

Story here is straightforward in that Aliens are attacking Humans and it is up to you and your ship to save the Human Race. This seems like a plot taken from the ‘70s and that’s where it gets better. The game’s writing is good in that it adds humor to an otherwise dark and twisted plot, thereby making the story retro-cheesy, which for me is the only good kind of cheesy.

I personally liked the story overall, and how they made fun of me on occasion as I accidentally blew-up people that I actually was supposed to save. It wasn’t my fault, it was the ship! Play this game and you’re going to be making a lot of excuses like that, I assure you.

The music, like everything else about the game, is retro goodness.  I can’t find anything to compare the music to but when you give it a listen, you’ll know that it’s a fusion of retro and modern music – which is something most games that pay tribute to retro fail to achieve. It’s great overall, and is sometimes energetic. Even so though,  it’s nothing memorable, so don’t expect the soundtrack to be of Final Fantasy VIII caliber. But it can stand on its own, and for me that’s good enough.

Related Article:  New Everwild trailer is pretty, as confusing as ever 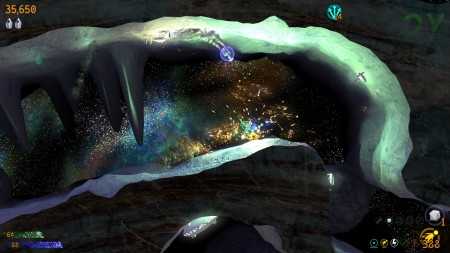 Retrobooster also features a multiplayer split-screen mode where you can take the hellishly difficult to control ship and have your friends have a hell of a fun time with you. Politely watch them flail around and die by hitting a wall or two, or have a fun time in a death match, it’s completely up to you.

Retrobooster is an amazingly difficult game with a simple story, but the game’s fun factor is directly connected to how frustrating it is to actually master. Controlling the ship and traversing the maps and the puzzles is very far from easy, but it’s oh-so satisfying when you get it right.

Its difficulty is set to the ‘70s so in 2010’s language- which would be a resounding “Hell naw! Difficulty” but again, that’s where its appeal comes from. The game is recommended for the retro gamer lover and is sure to satisfy anyone that tries it.

Against the Moon review – Operating on Moon Logic