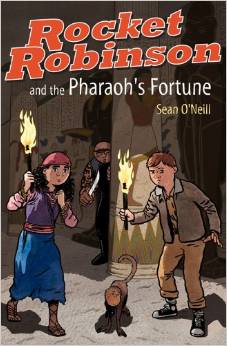 Rocket Robinson and the Pharaoh’s Fortune takes place in 1933 and stars Rocket Robinson a 12- year- old boy who comes to Cairo Egypt with his father, who works for the U.S. State Department. Rocket Robinson’s only friend is his pet monkey Screech. The two of them come across a mysterious note written in hieroglyphics. Rocket and Screech soon meet and befriend a gypsy girl named Nuri, and the three of them are thrust into an adventure full of mystery, action, and suspense.

Sean O’Neill is a father of two teenagers and besides working on the Rocket Robinson series, he also works as a freelance illustrator. While he doesn’t have a lot of time for any other hobbies he loves music, plays guitar, and sings in a rock band in when he gets a chance.

O’Neill grew up in Evanston Illinois just outside of Chicago. He said he has always drawn comics, including for the student newspapers in high school and college. As time passed O’Neill’s interests branched out towards music, theatre, and fine art [print making, and painting]. In short O’Neill said that he has taken a long winding path back to his original interest in cartooning.

Being a freelance illustrator for several years, O’Neill has had the opportunity to create illustrations for story books and textbooks, for companies such as McGraw-Hill, Harcourt, and Capstone Press.

O’Neill described how he came up the idea for the Rocket Robinson series, and mentioned that he saw the types of books and comics that his kids were reading when they were younger.

“I felt like there was a need for other types of comics for young readers, so I started to think about what kind of books and stories I would have liked when I was 9 or 10. I always loved adventure stories and I’ve always been interested in history, so I wanted to combine those interests with a comic series that would be exciting and really fun to read and to work on.”

O’Neill also added that he has always loved comics, but for some reason never tried creating his own until he got older due to fear.

“I think I was afraid it would be too much work, which, of course, it is. But now that I’ve gotten into it I don’t think I’ll be able to stop!”

O’Neill began writing and illustrating the graphic novel[developing the characters and story] in 2009.

O’Neill said that creating Rocket Robinson and the Pharaoh’s Fortune was a long and slow process, because he was working full-time.

“When I first came up with the idea, I spent about a year developing the characters, making sketches, researching ancient Egypt, writing the script, and doing a lot of preliminary artwork. I wanted to have a complete script before I started doing all of the page art, so there was a lot of writing and editing. I then spent about three years doing all of the final artwork.”

According to O’Neill the number one challenge he has faced during the creation of Rocket Robinson and the Pharaoh’s Fortune, was finding time to work on the project. When he first started this project, O’Neill said that he never made a graphic novel before and didn’t realize what an incredible amount of work it would be.

Luckily he enjoys the work even though it is very time consuming.

As an illustrator and writer, O’Neill described himself as a person that is diligent and focused in his work habits.

“I’m not the kind of person who can just wait around for inspiration to strike. I’m pretty methodical when I work on the comic and I plan ahead and research my work pretty thoroughly.”

O’Neill then went on to share his favourite scene[s] from the graphic novel.

“My favourite character is the villain, Otto von Sturm, and one scene I really like is when he reveals the plan for stealing the treasure to the rest of his crew. But I think my favourite scene is the confrontation between the Rocket and Nuri and Otto in the underground cavern, because it’s the only scene in the book that features all the main characters.”

In addition to having their favourite characters, authors also find out what characters relate to them the most. For O’Neill, he knew right away that he relates the most to Rocket.

“I was a very curious kid and always imagined myself going on amazing adventures, so now I can live out those adventures vicariously through the comic.”

For any project that a person embarks on, there is always a memorable rewarding experience that is gained. O’Neill shares his.

“Definitely the most rewarding thing has been meeting and talking to kids that have read the book and enjoyed it. I do a lot of school visits and attend several book and comic conventions, and talking to my readers and hearing what they think about the book is always really rewarding and super fun.”

O’Neill is working on the second volume of Rocket Robinson called: Rocket Robinson and the Secret of the Saint. Currently it is being serialized as a web comic so readers can follow the story at www.rocketrobinson.com/saint

Special thanks to Sean O’Neill for chatting with me.

Rocket Robinson and the Pharaoh’s Fortune is available on Amazon and local bookstores.

Legends of Runeterra Season of Fortune: All the new features coming

Interview with Sean Lykins: Creator of Lora and the Paper Mirror

The Fortnite Battle Bus vehicle is coming to Rocket League