Savage’s initial four book run concludes with a lot of action and conclusion to the problems and plots introduced throughout the first three issues.

In a way that is totally fitting the character of the book so far, Savage wraps up all of its loose ends, while easily tearing a hole in the universe, as if to joke about how little readers really know about the world in which it takes place.

Through the four book run, the characters developed through strong use of flashbacks. These didn’t get old,. and each book managed to bring something new to the world of Savage. All in all, Savage #4 wrapped up dangling plot devices well, and at the same time made room for an expanded story in the future.

Throughout the four issue mini series, Valiant introduced a number of plot threads that readers would need to wait until the conclusion for some answers and some lack of answers. In the case of Savage, the last issue does a great job of giving the conclusions to the threads of stories without closing the world to future possibilities.

Without giving away specific story threads it is safe to say that the conclusion to the book is satisfying. The final standoff between the big bad villain and the protagonist is staged in a way that makes sense for the world, and really, in a book about dinosaurs on a seemingly deserted island, that’s about all you can ask for.

The protagonist is shown to be cunning, versatile, and overall savage. This is the book where the reality of the world really comes into its own after the bleak harshness of the third book.

Standard and believable dialogue and writing:

At this point in the run of the comic, the writing has been well established. Throughout, it is brutal and short.

In a book about detectives or superheroes, this dialogue might feel jarring. Here, though, on a seeming post-society island populated by dinosaurs, the dialogue is perfect.

The evil character speaks in a way indicitive of pure evil. In a short run, though, that type of dialogue is fine. It doesn’t seem like there is really any room for a nuanced evil character over the space of a book and a half. Again, though, I don;t really mind it. The book will always have more room for nuanced baddies in the future of Valiant’s connected universe.

Related Article:  Welcome to the Howardverse

The art is impressive as always:

The art in Savage is as brutal and intense as it has been throughout the four book run. Whether blood is dripping from above a dino’s head, a man is getting impaled on a spear or a bad guy is getting his intestines ripped out, the art is impressive and sharp.

Throughout the entire run, art has been impressive, but given the scope of the art in the final issue, this is one of the book’s strong points. 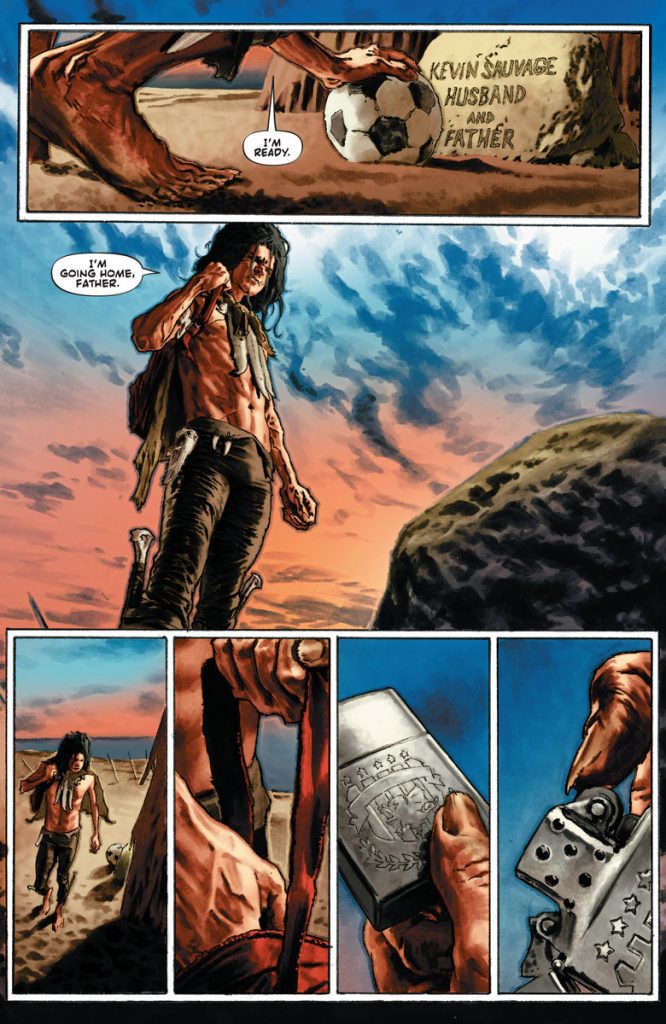 Savage was a great ride throughout a new world. Over four issues, we have learned a little about the world and the characters. I personally am anxiously awaiting the announcement of new stories regarding these characters and this world. It would be cool to see where we can go from here.

How to Say Goodbye review — A kind journey