It’s all right, ’cause Roar Comics’ has a Saved by the Bell collected edition that fans won’t want to miss. 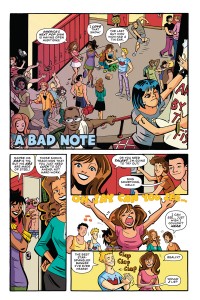 If you grew up in the late 80s or early 90s, then chances are you’ve seen more than a few episodes of what’s pretty widely considered the originator of the tween comedy – Saved by the Bell. The show, which headed for syndication at light speed and is still aired on TV, spawned a ton and a half of ‘me-toos’ and you could probably also assign it the credit for the Disney Channel explosion of shows that in turn created a bunch of stars continually making it big in Hollywood and the music industry today.

It all started back there though, in the year 1989 with Zach, Slater, Kelly, and the rest of the characters that a whole generation of people would grow up watching. And that’s exactly what you’ll find here in Roar Comics’ reimagining of the series too. Well, pretty much.

Collected here in this graphic novel are the first few issues of the digital comic, which saw release recently from the publisher and Lion Forge Comics. And man, is this book faithful to the show. Kicking off in their Freshmen year at Bayside High, the SbtB comic hits pretty much all the right notes and even includes after-school hangout The Max. The biggest difference from the classic TV show and the comic is actually just the fact that the book takes place now (well, in 2014), and not in 1989.

Much like the show too, you won’t really get any continuity here. Each issue collected in the graphic novel stands on its own, as a completely separate tale. Any connectivity that the various stories have is in the basic theme only, and goes very little further than that. So issue #1 presents the origin of the Bayside High setting and establishes the characters, the rest don’t really play off of each other too much and rarely intertwine. Again though, much like with everything else in the comic, the show was the same way. 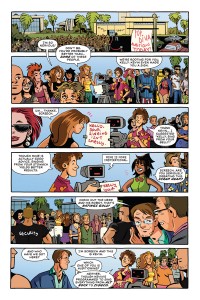 But while evolving story arcs and such aren’t something that you should be looking for, each of the main characters are spot-on perfect as to how they appeared on TV, and the scripts from writer Joelle Sellner fit the property flawlessly as well. It’s not hard at all to have the voices of the TV show’s cast running through your head as you read, and that’s not the easiest thing to pull off. Sellner though seems to really get the set of characters, and I’m pretty sure she must’ve seen just about every episode of the original run more than once or twice.

Now, as with the show, this isn’t the most mature of stuff. Remember that SbtB was a show more or less aimed at kids, so don’t expect to read any tales of moral gravity or stories filled with world-shaking issues. Instead the stories presented here in this graphic novelization are fun and fluffy, nothing more. I guess I’d liken it most to an Archie comic, as I read a few of those when I was a kid and the themes seem to be more or less similar, just with a hipper tone existing here- and of course, that modern setting.

The art reflects the feel too, with an expected cartoony overtone that varies quite a bit on who’s penciling which issue. Both Chynna Clugston Flores and Tim Fish handle the artwork, and their styles are most definitely compatible, but nonetheless different enough to see the difference. That’s actually pretty cool since the change in artists mixes things up a bit, and you get to see differing character designs instead of just the same straight through.

Related Article:  RoboCop vs the Terminator heads back to print

Though I will add that principal Mr. Belding has way too much hair throughout. I mean, seriously, he’s almost bald in the show isn’t he?

Bottom line; if you are or have ever been a fan of the show, then you’re probably going to like what Roar Comics has going on here with Saved by the Bell the comic book.

The scripts are incredibly reminiscent of the small screen action, right down to the character’s personality traits and off-the-wall storylines. Screech appears as a sort-or superhero at one point, and if that doesn’t remind you of something that you’d have seen in the show, then I don’t think you’ve seen enough episodes to judge.

Perfect for younger readers, and a nice afternoon of reading for older fans who remember watching the show on Autumn afternoons after school, Saved by the Bell is an enjoyable tribute to a cultural phenomenon and a fun time all around.