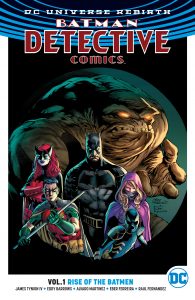 If you’ve been following recent events, then you know that DC Comics has been dabbling in the world of Hanna-Barbera. With Scooby and Flintstones reimaginings already in the stable, the publisher is delving into stuff like Snagglepuss and others, with stories coming up soon.

Today though, we’ve got a collected edition for the first arc that hit Scooby Doo Apocalypse. As you can see from the cover, it’s a weird one. I haven’t read any of the new series, but it looks gloriously strange. Hipster versions of the characters and lots of big guns and tech everywhere will do that. Think Scooby and gang go up against something more than old men in costumes in this one? I’d say so.

Also new, is the Detective Comics Vol.1: Rise of the Batmen book. This new trade includes the first arc from the restarted Detective Comics series. It kicks off the team dynamic that’s taken over that book, with Batwoman and Clayface serving Gotham alongside the Dark Knight.

I’m not in love with that to be honest, as I’m more of a loner Batman fanboy. I sort of like the classic Batman/Robin dynamic to a degree too, but having a team… eh. Outside of the League, it’s not the most ‘Batman’ thing to me really. Though I’m sure some fans will debate that.

Both tomes are available right now at your local comics shop. But if you prefer a little bookstore shopping, then you’ll be happy to note that you can grab both at book shops as of tomorrow.

Baltimore takes on the Witch of Harju in new series