Tragnarion Studios’ third-person action title has gotten more than its fair share of criticism since it’s launch a few weeks ago, but you know what- it’s not really that bad. 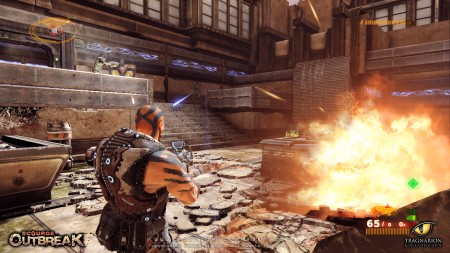 It’s not that Scourge: Outbreak is the greatest game in the world, or anything groundbreaking for that matter, but it’s certainly not as horrific as some would suggest. I’m kind of getting ahead of myself though, so let’s get into the meat and potatoes of the game and how it plays.

SO kicks off with your team (Echo Squad) heading into hostile territory to battle an evil corporation bent on world domination. It seems Nogari Corp has got a power-source called Ambrosia that’s light years ahead of anything else on Earth. They have a monopoly on the stuff and a stranglehold on the world’s economies. They’re also as shady as they come and have their tendrils into everything you could imagine.

That’s where Echo Squad comes in. Along with Alpha Squad, they’re sent into Nogari’s island base (which kind of reminds me of Cobra on the G.I. Joe cartoon for some reason) with what basically amounts to a UN/coalition force, to put a stop to Nogari’s evil deeds. 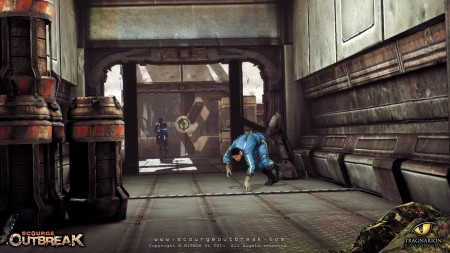 If that sounds as basic and black and white as a plotline can get, then you’re on the money because it is. That’s not to say that it’s awful or even any worse than many of the games that come and go with little fanfare throughout the year. This isn’t a blockbuster and it seems like it knows it.

Likewise, the main characters in the game are pretty cookie-cutter with the stoic leader Stonewall (fitting name), the big and burly Mass, the fast and deadly Amp and the enigmatic assassin known as Shade making up the quartet. One kind of cool element is that each one of them has a personal stake in the island assault, which actually does add to the story in a solid way.

As far as graphics go, Scourge: Outbreak is shockingly decent- which might sound backhanded, but I really do mean it as a compliment in this case. When I sat down to play, I had already heard much of the negative scuttle about Tragnarion’s shooter and thought I was in for a rough time. That’s actually not the case though as the Unreal Engine 3-powered visuals are actually pretty good.

The animation is smooth and the graphics on most of the levels (both indoors and out) are rock solid. I can’t say I cared all that much for the enemy designs, but in a game like this you’re really only looking at baddies to blast away at them anyway. 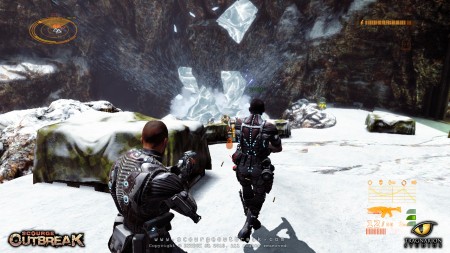 And blasting at said enemies is a pretty straight-forward affair. Thankfully, the controls in Scourge: Outbreak were relatively trouble free and work just fine. All four characters have their standard hardware like rifles, pistols and machine guns (as well as few more outlandish weapons) and can also use offensive and defensive super-powers that are tied to their suits.

The suits run off of Ambrosia and need to be charged regularly, no worries though as there are a ton of opportunities to do so in each level. The special abilities that you have access to when they’re ready to be used aren’t exactly deep, but you do have some pretty cool tricks up your sleeve like a shockwave that’ll knock back groups of foes or a shield that’ll instantly provide protection from incoming rounds.

Related Article:  Impressions From the First Few Hours in God of War

Some oddities I found while playing were the panels that occasionally wouldn’t register inputs, enemies that I couldn’t hit for some reason and several odd moments when I had cleared levels and thought that game had saved only to find myself back before my save again the next time I played. I’m honestly not sure if those were bugs or if that was just the way it was designed though.

I know there’s a lot of negatives in that write-up and, believe me, Scourge: Outbreak isevery bit of what I called it out for- but it’s not terrible either.

SO reminds me of a Syfy channel movie or a flick from the late 80’s or early 90’s. There are a lot of rough edges, the script isn’t all that great and neither is the acting, but it’s still a relatively fun time and not a bad way to spend some time. You just kind of have to switch off the old noggin and have at it, ’cause much like in those old action movies, you won’t need to think too much while you play Scourge: Outbreak.