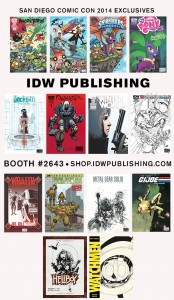 Needless to say, there’ll be plenty to buy at this year’s SDCC, as there always is. IDW just added a good deal to that stack of purchase options with their listing of comics for the biggest pop culture and comic book convention in the US. Chief on that list are the new Artist’s Edition books.

If you’re not familiar with the line, Artist’s Edition books are some of the coolest books that IDW publishes are like celebrations of individual artist’s and their most famous books. You won’t find just IDW imprinted pencilers here either, as the Artist’s Editions run the publishing gamut from Dark Horse, to Marvel, to DC and everything in between. They’re a bit on the pricy side, but if you’re a devotee, they’re well worth it.

Also up in 2014 are a bunch of SDCC-exclusive variant comics that you won’t find anywhere else and books of every other flavor with selections from the company’s TMNT and My Little Pony lines. Have a look below for the full scoop, make your picks, and then get there early on the show days as these won’t last. But you know the drill by now.

Mike Mignola’s Hellboy: Artist’s Edition Variant HC
Mike Mignola is one of the preeminent comics creators of the past 25 years and Hellboy, his iconic creation, struck a meteoric chord with fans from the very start and has not abated in the 20 years since his debut. Featuring a variant cover from Mignola himself, only available at SDCC!
$125, Limited to 100 copies, 2 per person
AVAILABLE FOR PRE-ORDER HERE:http://bit.ly/1oeqOWl

Dave Gibbon’s Watchmen: Artifact Edition Variant HC
Watchmen has been called the greatest graphic novel of all time. Alan Moore andDave Gibbons created a story and graphic narrative unlike anything that preceded it, and revitalized the entire art form that followed. Featuring a variant cover from Dave Gibbons, who’ll be signing all 5 days of the Con at the IDW booth!
$100, Limited to 225 copies, 2 per person
AVAILABLE FOR PRE-ORDER HERE: http://bit.ly/1mrX4Ii

Also, look for the show debut of the Steranko Nick Fury: Agent of S.H.I.E.L.D. Artist’s Edition HC! And watch for Mike Mignola, Dave Gibbons, Walter Simonson, and Jim Steranko ALL signing in the IDW booth!

Ragnarok #1 Variant
With a matte cover and spot-varnish treatment of Walter Simonson‘s menacing Thor sketch, this convention exclusive will not last long!
$10, Limited to 400 copies, 5 per person

Locke & Key: The Covers of Gabriel Rodriguez Variant HC
This convention exclusive displays an original blue-line pencils and inks cover by Gabriel Rodriguez for the show debut of this Locke & Key covers collection!
$40, Limited to 100 copies, 2 per person
AVAILABLE FOR PRE-ORDER HERE: http://bit.ly/1r3B87p

Winterworld #1 Variant
All-new stories based on the Chuck Dixon/Jorge Zaffino classic with Dixon returning to script andButch Guice doing some of the best work of his illustrious artistic career. Convention exclusive cover featuring Wynn, by Will Rosado!
$5, Limited to 200 copies, 5 per person

Also, watch out for the blank sketch edition of Transformers vs. G.I. JOE #1, as well as the three variant covers on sale with Diamond Comic Distributors!

Metal Gear Solid Deluxe Variant HC
Get your convention exclusive copy, with front and back cover artwork by Ashley Wood, of this oversized collection of the entire series from celebrated artists Ashley Wood and Rufus Dayglo,
$75, Limited to 100 copies, 2 per person
AVAILABLE FOR PRE-ORDER HERE: http://bit.ly/VT8ZWk

FOR SHELL HEADS (AKA TMNT FANS)

Teenage Mutant Ninja Turtles 30th Anniversary Special Variant
Don’t miss out on the special convention exclusive cover by The Manhattan Projects artist, Nick Pitarrafor this spectacular anthology of all-new tales from the comic creators who have most influenced the Turtles over the decades!
$10, Limited to 300 copies, 5 per person
A Blank Sketch Cover also available!
$10, Limited to 900 copies, 5 per person

FOR KIDS OF EVERY AGE

My Little Pony: Friendship is Magic #21 Exclusive Pony Pack Edition
Featuring an 8 page story unavailable ANYWHERE ELSE! The villainous Mane-iac takes over the cover to this convention exclusive that comes complete with your first look inside the My Little Pony Annual 2014, featuring the debut of the super-heroic Pony Pack!
$10, Limited to 500 copies, 5 per person

Skylanders #0
The comic debut of Skylanders! Unavailable anywhere else!! This Zero Issue focuses on all your fan-favorite characters and featuring a prequel story tying directly into the new Skylanders Trap Team videogame. The convention exclusive cover by Fico Ossio and David Garcia Cruz features Spyro, Stealth Elf, and Trigger Happy.
$5, Limited to 700 copies, 5 per person

A TOY & A KEY (COLLECTIBLES)

Paschaborg 001 (3A Toy)
From Count Kriegstein’s imagination straight to your hearts is PASCHABORG 001! Exclusively available through IDW Publishing, PASCHABORG 001 is Ashley Wood‘s 2014 San Diego Comic-Con offering. We suggest you pre-order yours now because she won’t last long!
$150, Limited to 100 pieces, 1 per person
AVAILABLE FOR PRE-ORDER HERE: http://3a.idwpublishing.com

Locke & Key: Alpha Key
The highly sought after keys made by Skelton Crew Studios, modeled after Gabriel Rodriguez‘s designs in Locke & Key, return to the IDW Booth at San Diego Comic-Con with the specially plated edition of the Alpha Key.
$25, Limited to 100 pieces, 1 per person

Look for more news soon from IDW on San Diego Comic-Con International! You won’t believe the list of creators we’ve got coming. Here’s a hint, a whole bunch of them have books on this list!

NYCC 2016: Grab these IDW exclusives at the Con