Marvel fans are going to have plenty to go and see this week in San Diego. 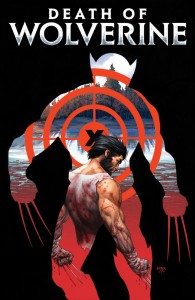 Yep, if you’re a Marvellite, you’ve got quite the panel lineup to attend this week at the San Diego Comic Con. The publishing giant will be talking pretty much everything from Death of Wolverine to Avengers NOW! and all the major changes that they’ve made/are making to their universe, including the new Cap and Thor.

And then of course, while you’re hitting all those panels, don’t forget that there are plenty of free goodies and signings with major talent scheduled to appear at the Marvel Comics booth (#2329) on the show floor as well. Don’t worry, you should have a few minutes here and there to get everything at the booth done between panels. Maybe.

Have a passion for the inner workings of the comics industry? Curious about breaking into the field as a writer or artist? Sit down with a group of Marvel professionals from every corner of the business, and get insider tips, advice, and first-hand accounts of what it takes to start a career in comics today! Panelists include Editor in Chief Axel Alonso, Talent Scout C.B. Cebulski and a slew of Marvel talent!

Love having the best comics in the industry on your mobile devices? Want to know how Marvel stays on the cutting edge of technology while bringing you what you love? Want to learn more about Infinite Comics? Well, this panel is for you, True Believer! Get exciting news from Ryan Penagos (Executive Editorial Director of Digital) and other guests on what’s happening with the Marvel Comics App, Marvel AR, Marvel.com, Marvel’s vast social media presence and more in this can’t-miss panel!

Are you ready for Marvel’s biggest event of the year?  In Avengers & X-Men: AXIS, the Red Skull has enslaved thousands, amassed an army and now broadcasts his message of hate across the world.  Earth’s last hope hinges on the fragile alliance of two estranged teams – the Avengers and the X-Men!  A who’s who of Marvel talent and editors will be on hand to discuss this Marvel blockbuster!  PLUS, find out the latest on current and future X-titles!  Join Editor-in-Chief Axel Alonso, Executive Editor Mike Marts, Senior EditorNick Lowe, Avengers & X-Men: AXIS writer Rick Remender and other Mighty Marvel guests for a rousing discussion and Q&A session!

Related Article:  One of the greatest X-Men runs of all time is getting an Artifact Edition from IDW

It’s the most epic Spider-Man event of all time as every Spider-Man EVER come together to face a world-ending threat!  Senior Editor Nick Lowe, Dan Slott (Amazing Spider-Man) and Mark Waid (Daredevil) will be taking any and all questions from YOU the fans!  This is one panel no Spidey fan can miss!

This is the Avengers like you’ve never seen then before!  Marvel is bringing its biggest creators and its best characters together for Avengers NOW!  Join Editor-in-Chief Axel Alonso, Rick Remender (Avengers & X-Men: AXIS), Jason Aaron (Original Sin) and other guests as they dish on the evolution of Marvel’s most iconic characters!

Jeph Loeb (Marvel’s Head of Television) returns with exciting news and fun surprises for fans! Join Jeph and the casts of Marvel’s Agents of S.H.I.E.L.D. and Marvel’s Agent Carter in this can’t-miss panel that will take you behind the scenes and into the future of Marvel’s live action television series.

Jeph Loeb (Marvel’s Head of Television; Hydra Agent) returns for what’s become one of the most popular television panels at San Diego!  Join Jeph, Stephen Wacker (VP – Animation & Writing Panel Blurbs ), Cort Lane (Huge Nerd, VP) and Eric Radomski(Giant Dork, SVP) for the latest news on the House of Ideas’ hit animated shows:  Marvel’s Avengers Assemble and Marvel’s Hulk & The Agents of S.M.A.S.H. PLUS: See the eye-popping WORLD PREMIERE of Marvel’s Ultimate Spider-Man: Web Warriors’ history-making epic: “Spider-Verse”! DOUBLE PLUS: A special EXCLUSIVE never before seen surprise for MARVEL fans that you will all be talking about for the rest of the convention!

Join the Marvel Games team and some of the most talented developers in the industry as they cover nearly 15(!) awesome Marvel gaming experiences spanning all platforms – many of which feature the GUARDIANS OF THE GALAXY! Whether it’s EXCLUSIVE ANNOUNCEMENTS regarding one of the year’s biggest console titles (Disney Infinity 2.0: Marvel Super Heroes), UPDATES to current favorites (Marvel Avengers Alliance,Marvel Avengers Alliance Tactics, Marvel Heroes, Marvel Puzzle Quest, Marvel: War of Heroes, X-Men: Battle of the Atom, Marvel Pinball and more), or entirely NEW GAME ANNOUNCEMENTS, there’s something here for every True Believer of the digital age.  Also, a surprise special guest appearance — and the COOLEST GIVEAWAY we’ve ever handed out!

Join us for this Convention favorite! Here is your chance to Q&A with Marvel’s Chief Creative Officer Joe Quesada, for this no-holds-barred exposé on everything Marvel. Got a question about a favorite hero? Want to hear groundbreaking news straight from the source? Need a rundown on breaking developments in Marvel comics, film, and T.V? This panel is for you!  Featuring Editor-in-Chief Axel Alonso, Talent Scout C.B. Cebulski, Senior Editor Nick Lowe, Editor Jordan D. White, writers Brian Michael Bendis(Guardians of the Galaxy) and Dan Slott (Amazing Spider-Man) and other Mighty Marvel guests!

Marvel Studios president and producer Kevin Feige and special guests provide an inside look at the ever-expanding Marvel Cinematic Universe.

Marvel Unlimited Plus Members Only Panel

Related Article:  The Witcher gets the Library Edition treatment at Dark Horse

From Ms. Marvel to Black Widow, from Twitter to tumblr, women in comics has been one of the most talked-about topics in the industry recently.  Join the conversation as women from every discipline in the creative process at Marvel discuss what it’s like working as a woman in comics today and what it means for the future of the industry!  Panelists include Producer & Photographer Judy Stephens, Marvel’s The Watcher host Lorraine Cink, Social Media Manager Adri Cowan, Marvel Studios Asset Manager Alexis Auditore, Marvel Studios SVP of Visual Effects Victoria Alonso, writer Erica Schultz (RevengeOGN), artist Katie Cook (All-New Marvel NOW! Animal Variants), artist Joanna Estep(100th Anniversary: Fantastic Four), artist Rachelle Rosenberg (Amazing X-Men) and special guest Editor-in-Chief Axel Alonso!

Gather ‘round friends and family to pay respect for our honored dead – the legendary X-Man Wolverine!  The Death of Wolverine is here and it will rock you to the core!  Plus, what happens in the wake of this summer’s murder mystery mega-event Original Sin?  Join Executive Editor Mike Marts, Senior Editor Nick Lowe, and writers Gerry Duggan(Deadpool), Charles Soule (Death of Wolverine), and Mark Waid (Daredevil) for a panel discussion on the next big storylines of the Marvel Universe!

Can’t make it to the convention? Follow along on the Marvel.com and @Marvel on Twitter, the best way to get exclusive photos and videos, real-time announcements from the convention floor and up-to-the-minute panel, in-booth, and signing schedules of all your favorite Marvel creators!

In case you missed it, there’s a new Captain America coming to Marvel