Most of what Mattel was showing off at SDCC was of the Masters of the Universe natures, though there was a smattering of new DC Comics merchandise to be seen and a special 30th anniversary Ghostbusters set featuring the boys in grey. 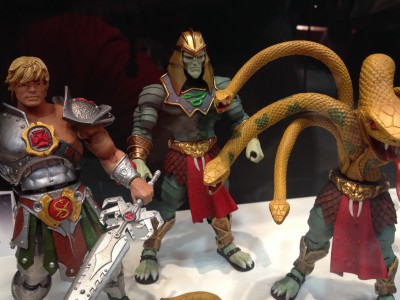 If you’re a Masters of the Universe fan, then there was an overabundance of cool stuff on display in San Diego for you to get excited about at the Mattel booth.

As far as Masters of the Universe Classic toys, Mattel had stuff that fans had been expecting to see, as well as some real surprises. Skeletor’s robot drones, the 200x He-Man vs King Hsss 2-pack, and Oo-Lar (finally!) the Jungle He-Man were all chief among the biggest shockers. Of course, they were joined by some figures that we’d been expecting to get for some time like Gwildor and Ninjor (who looks awesome), which were also great to see.

But there was more than just MOTUC on hand, as Mattel also showed off the first retro jumbo figures. Made in the same molds as the classic He-Man toys from the 80s, these giant-sized figures were impressive indeed and would make a great showpiece for any collectors castle. Then there was the mini assortment, complete with a scheduled subscription that’ll be accompanying the second series of these miniature MOTU figs. And just like the first series included a ‘collect and build’ Castle Greyskull, series 2 will sport a buildable Snake Mountain. No, it’s not as great as a full-sized playset, but it’s better than nothing.

Related Article:  The Batman Who Laughs mini-series coming this November from DC

I however, you’re not a He-Man fan, well… there really wasn’t much to see.

The DC Comics line, which in my estimation should be cranking into high gear, had little to no new product outside of a life-size Batman ’66 prop cowl and some new Batman: Arkham toys. Clayface and Grundy both looked awesome in that 3.75″ scale line, but I’m still waiting for the return of the 6″, detailed scale for the DC line. And before you ask, no I don’t buy the statement that 6″ figures with decent detail and paint apps are too expensive to produce. All you need do is look at the Marvel Legends line from Hasbro to see that. Not that that’s all that great of a line anymore, but you get my point.

Oh, and one cool surprise was to see something (anything) from Ghostbusters at the booth. The 30th anniversary product might’ve been scarce, but at least there was something on display and coming to stores (or at the very least, Mattycollector.com) for fans this year.

Related Article:  SDCC: MTV2 hosts a Party in the Park