The Witcher 3: Wild Hunt is going to be big, and if you’re in any doubt of that, all you have to do is check out the presence the game is set to have st this year’s SDCC next week. 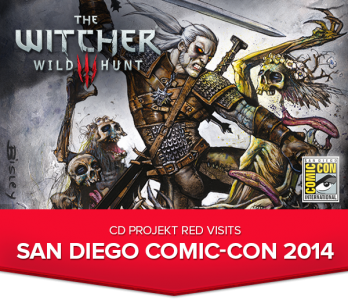 “Since this is the first Comic-Con for Geralt of Rivia, we’re going the extra mile to talk to as many Witcher fans as possible, at as many places as possible–we have a really mighty line up”, said Rafał Jaki, Witcher franchise director, CD PROJEKT RED. “It’s a real pleasure to see The Witcher among all those comic book and movie characters we know and love,” Jaki added.

I actually have a hard time believing that this is the first year that the series will be represented at the big show, but I guess that’s true. The Witcher has been one of the premier RPG series’ in all of gaming for a while now, and this is the first SDCC where it’s really making a splash? The word ‘overdue’ comes to mind.

If you’re going to be at the show, then you’re going to see a lot of the game. With two panel presentations and a major presence at the Geek & Sundry Consumer Lounge planned, you’ll actually be hard pressed to not stumble into something Geralt of Rivia related.

As a special gift, everybody who attends a panel for The Witcher 3 will be on the receiving end of an SDCC-exclusive postcard featuring the art of comic great Simon Bisley. The Bis (who I remember well from stuff like Death Dealer and DC’s Lobo) has a great style for the type of characters that The Witcher showcases and you can see that in all its glory above.

SDCC: Minimate HQ to open at the Con

SDCC 2015: Mighty No.9 playable at the con and… a live action movie is on the way