Some interesting Mighty No.9 news has emerged from Comic Con… 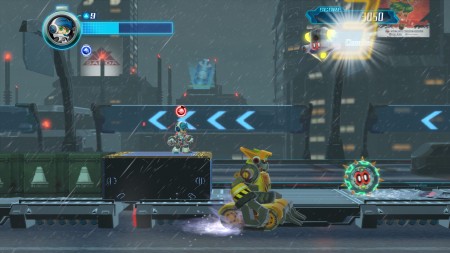 First, get over to booth #3829 and visit with publisher Deep Silver. I mean it, Mighty No.9 is playable at no less than 6 kiosks over there and if you’re at the Con, well, it’d be a good idea to try it out. It’s only one of the most anticipated games of the year after all, and the brainchild of Mega Man creator Keiji Inafune.

Now on to the stranger, and somewhat even cooler, news. There’s going to be a Mighty No.9 movie. A live action movie. Yes, I know what you’re thinking, but everything has been so great surrounding this game that I can’t do anything else but hope that this flick is going to be -at the very least- a ton of fun.

The movie won’t be a silver screen adaptation, but instead be heading to digital distribution platforms and will be adapted by Legendary Digital and Contradiction. You might remember those names as the folks who did the movie for Capcom’s Dead Rising, another of Inafune’s creations.

“Legendary Digital and Contradiction have carved out a unique niche for ourselves, developing video game IP into successful feature-length and series content for digital platforms the world over,” said Greg Siegel, Legendary Digital Media’s Senior Vice President, Development and Production.  “We are honored to have another opportunity to translate Inafune’s immersive worlds, engaging characters and action-packed gameplay into a live action project for video game fans and fans of streaming video alike.”

“We are thrilled to be working with the great Inafune-san on MIGHTY NO. 9 and feel so fortunate that the Legendary Digital team shares a common vision for the live action adaptation of this very special video game,” said Tomas Harlan, partner at Contradiction.

“The announcement that Legendary Digital is collaborating with Contradiction and comcept on creating a live action project based on MIGHTY NO. 9 is really amazing, not only for myself and the rest of the team at comcept who worked on the game, but also for all the fans who have supported the project,” said Keiji Inafune, comcept’s CEO. “This collaboration will give our creation the ability to reach people all over the world. Thanks to all of your support, we have fulfilled another one of our dreams,” Inafune added.

Yeah video game movies haven’t been the greatest of things… ever, but just dream a little would you? I mean, how can you not want to know what a Mighty No.9 movie would be like? And a live action one to boot. It’s a bunch of robots battling each other; I don’t know about you, but I have to know how that turns out.

No release date for the movie yet, but the game Mighty No.9 hits consoles and the PC this September the 15th in the US, and on the 18th globally.

SDCC 19: The World of Cyberpunk 2077 announced by Dark Horse