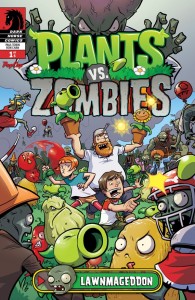 A mini-series event from Paul Tobin and Ron Chan, Plants vs Zombies: Lawnmageddon will run six issues which will be available digitally through a special PvZ app created by Dark Horse just for the limited run. The App will usually carry a .99 cent price tag (but will include issue #1), but is free for the remainder of the SDCC event. That means get it now, because on Monday the 21st it’ll cost you just shy of a buck.

PvZ is a monster of a hit on just about every platform it’s landed it’s undead feet on and a comic to expand the off the wall universe that PopCap Games has created sounds like a pretty obvious step. Releasing it digitally first is also a pretty nice tip of the cap to the game’s digital heritage on mobile platforms.

Now, I say ‘first’ because there will indeed be a physical edition of the book. Coming this Fall, Dark Horse Comics plans on bundling all six issues together into a special deluxe hardcover tome that should be just about perfect for any fan of the growing series.

That’s not till this Autumn though and the series is out right now. Both the first and second issues of the comic have already posted to the App and are available for purchase and download. Just remember, the first issue is free until Monday, so now’s the time if you want the goods for naught.

As for the remaining four chapters in the Plants vs Zombies saga, here are your dates for release:

And if you’re waiting out that hardcover edition, it’ll be on store shelves this November the 6th in comic shops, and on the 19th at bookstores.

Get every Dark Horse Star Wars comic digitally for $300