Take a detailed look at the robotic Silver Samurai as seen in Fox’ upcoming film, The Wolverine. 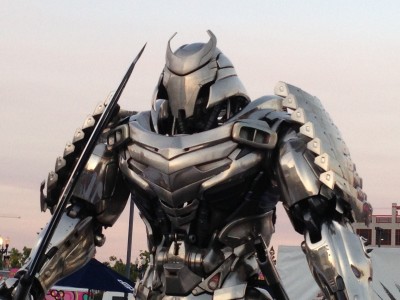 Right off the bat- this is one impressive suit of armor.

Located in a lot next to the San Diego Convention Center with displays for the Cartoon Network’s adult swim, Man of Steel, the upcoming Cosmos remake and Falling Skies (among other things), the Silver Samurai armor stood tall and looked like something that you probably wouldn’t want to mess with.

The character has been around for a long time in the Marvel (comics) Universe and has tussled with Daredevil (which was actually his first appearance), Spider-Man and The Avengers in addition to Wolverine. His connection to Wolvie is a strong one though thanks to the mutant hero’s ties to Japan. Originally, the Samurai was Kenuichio Harada, who went back and forth a bit from good guy to bad before his son took over the reigns of the Samurai. 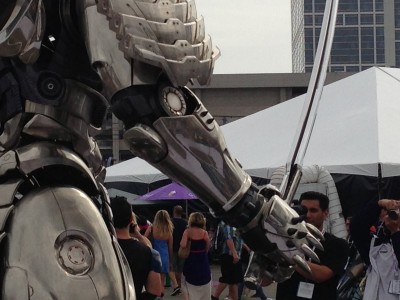 His mutant powers included the ability to infuse any object with a tachyon field, which is something he often did with his sword allowing it to cut through anything- except adamantium. Harada’s son has no mutant abilities, but he does have a way more technologically advanced suit of armor than his dad did. It’s a suit that looks an awful lot like the one in The Wolverine, so I imagine the character is somewhat of a mix between the two Harada’s in the movie.

Back to the suit though; as I said, it was one impressive sight. Standing about 9 and a half to 10 feet tall (I’m guessing), the Silver Samurai armor loos about as comic-accurate as you’re going to get for an X-Men movie and feels like something that’d be more at home in a sci-fi flick than a superhero tale. That’s a compliment by the way, as I always thought SS was a somewhat goofy character and never really fit in with the stories and characters that he was intertwined with. That’s definitely not the case with this version of the character.

Hugh Jackman reprises his role as Logan for the sixth time in The Wolverine. The film opens in theaters today, July 26th from director James Mangold and 20th Century Fox. Have a peek at our gallery below and check out the Silver Samurai armor in detail to see just how big a problem Logan will have on his claws in the movie.

Samurai Jack to continue with new comic from IDW