Lucasfilm Ltd., Disney and their various publishing partners have announced the second annual Star Wars Reads Day will be making the jump to lightspeed this Fall. 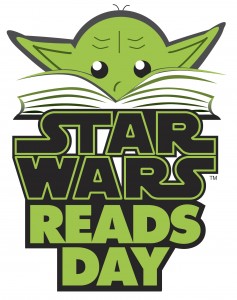 Star Wars Reads Day is relatively new (not the ‘second annual’ line above), but it’s already made an impact. With some 30 authors and 1,500 costumed volunteers showing up to 1,200 different SWRD events last year, there was a whole lot of reading going on in a galaxy far, far away in 2012.

This year’s events will be held on October 5th and will star a who’s who of Star Wars publishing. Fans (and readers) can expect to see the likes of Abrams, Chronicle Books, Dark Horse, Del Rey, DK, Quirk Books, Random House Audio, Scholastic, Titan Magazines and Workman all represented at Star Wars Reads Day 2013.

“Star Wars Reads Day is the kind of initiative that we at Lucasfilm love to support” says Carol Roeder, Director of Publishing at Lucasfilm. “Reading and Star Wars have gone hand-in-hand since 1976, when the novelization of the original Star Wars movie was released. Over the years, many fans have discovered the joy in reading through Star Wars books, and we hope to continue encouraging more people to read.”

Ready to read? Here’s the schedule for Star Wars Reads Day 2013 with a full list of the major events already set for across the US:

Now, if you don’t see your city (or anywhere nearby) don’t worry, because you can log onto StarWars.com’s special site for Star Wars Reads Day 2013 and download an ‘event kit’. The kit contains all you need to get your own party started on Reads Day including activity sheets and trivia games.

Want more? Follow Star Wars Reads on facebook for all the updates and info- straight from the source.