Nine Sega classics are getting the 3D treatment for a boxed retail release. 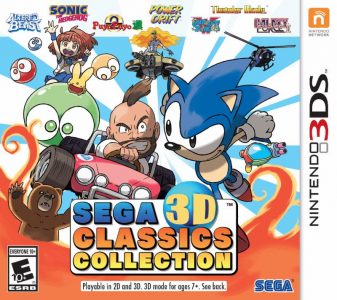 Yes, if you’re a Sega fan, then chances are that you’ve played some of these games already, but the publisher hopes to hook into buying into this retail release (it’ll be available digitally as well) with the promise of something new. In addition to the already available (digitally) games like Sonic the Hedgehog and Thunder Blade, Sega has added some never-before-seen (in the US) titles like Fantasy Zone 2: The Tears of Opa-Opa and Power Drift.

Here’s what you get in total:

Because it’s a collection, the most prudent thing to do would be to list the games included, starting with the titles never-before-released outside of Japan first:

Next, we have a pair of rarities not released on the 3DS before – true collectibles for the Master System enthusiast:

And for the previously released titles:

Not too shabby really, and if you’ve not already bought in for some of the games included, it’s actually a really great pack. I had a lot of fun with just Sonic and Altered Beast personally, so I’d say it’s worth checking out the collection.