Mal and his crew find themselves on the business end of some firearms when they go looking for a missing person. See where they end up in Serenity #2.

Wrong End of a Rifle 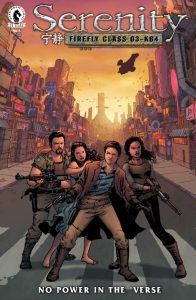 Issue #1 left us with our gang held at gunpoint for trying to track down a missing person. For a friend.  I’m sure Malcolm would have some colorful quote here about helping people out. Though the gang manages to get things back in working order after some colorful maneuvering.
The woman in charge of this house has a few names, and a few purposes to go with them. Miss Thompson. Miss Mericourt. She’s running a halfway house for children. However, what you cannot see from outside, is the other side of her operation. Mericourt is training children for combat.

When it comes time for shootin, they’ll be ready.

There’s a “New Resistance” floating around, and Mericourt wants nothing to do with it. She and the Peacemakers already have their sights on an awfully big target. Though where will Mal and the Serenity crew fit into such a plan?

After Mal and Simon get into a squabble of ethics, Maricourt tells Mal that the person they are looking for, asked for a meet, and then never showed up. They learn that she’s been snatched by the Feds. Now Mal, Inara and Maricourt get to plan out some mischief. Some things never get old!

Simon can’t seem to let go of his opinion regarding the people they are working with. This triggered Mal, and now Kaylee. He’s going to find himself without a ship if he keeps this up. Meanwhile on the other side of the supply shop, Kaylee had their mail forwarded and Jayne get’s a package. Who doesn’t love getting gifts in the mail when far from home?

And then River goes off with a new acquaintance , only to find herself in a different kind of trouble. River has always been a little different than the rest of the crew, any one who is a fan of Firefly/Serenity knows that. So it seems a bit odd that Simon would let her wander off with a new associate that easily, while at the same time, perfectly believable that she could be led into such a sticky situation.

Simon aside, Mal and the rest of the crew seem to adapt well enough to their latest idea: working with a new resistance movement. Where are the other cells of this movement? How will Mal make enough scratch to keep his boat in the sky? If these new associates have the network of people that they claim to, why wouldn’t they jump on board?

Gumby and Pokey return to comics courtesy of Papercutz