Bea is imprisoned, An Alliance Operative is after them, and the crew has yet to realize one of them is missing. Find out more, in Serenity #3. 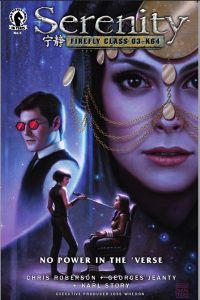 Anyone who is familiar with the crew of the Firefly, knows that they are no strangers to trouble, and waking to ‘You’ll have to excuse the shackles’ is rather routine. However, the one in shackles is fairly new to these things. If you’ve read Serenity #2, you’ll have a better idea of who I am mentioning. If that isn’t bad enough, we learn that there is a spy, reporting on Mal and company’s efforts with Mericourt’s resistance movement. And if that’s not bad enough, they want the kidnappee to switch sides. To work against Mal and Mericourt. But re-uniting this ‘family’ is only the beginning. The real work is yet to begin.

Across town, Jayne and the rest of the crew are hauling supplies onto their ship, which everyone is none-to-pleased to be dragging around. Mal and Zoe talk of how they don’t trust anyone involved in their latest job, when Mal butts in. No trust is needed. As long as they do their part, they’ll get Bea released, and can be off this rock. No one thinks too much of River’s absence, as she went shopping with one of their new friends.

Mal barks that there is an Alliance Operative on their way, so no time to lose. They have to go through with their plan, with only the members currently present.

Simon and Inara head into the lion’s den, so to speak. They have enough familiarity of Alliance workings that they should be able to get around without raising too much suspicion. Jayne proves how much help he can be to Kaylee in Engineering, and Mericourt continues to be elusive as to what is actually planned against the Alliance. All we know is that she is ‘sending them a message’.

Marvel officially teases the end of the line for Daredevil