Wayforward had quite a week as it laid out the schedule for some much anticipated games and a Kickstarter they have planned. 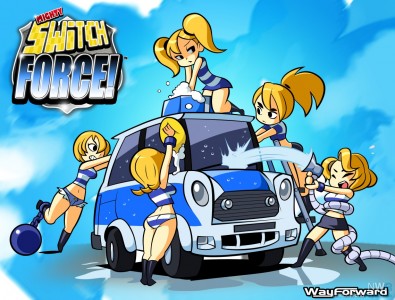 If you’ve been wanting to play Mighty Switch Force 2, but don’t have a 3DS at the moment, then you’ll be happy to know that its coming out on the Wii U eshop as well. The game is a sequel to a puzzle platformer where you play as a police officer tasked to capture several female criminals. The second game changes things around a bit, giving the the main character Patricia a fire hose capable of pushing the blocks in the levels around.

Shantae and the Pirate’s Curse is now playable at PAX. So for those of you that have been anxiously awaiting the chance to play this game, come on over to PAX and try her out. This game is a direct sequel to Shantae Risky’s Revenge; where Risky herself approaches Shantae and tells her that her powers were split into several different shards, merging with her followers, giving them the power to challenge her. The two of them form a temporary alliance to try and end the catastrophe that has taken place.

Finally, WayForward is planning a Kickstarter this Wednesday. What could the mysterious Kickstarter be about? We’ll have to wait until September 4th to find out.

Die by the Blade reaches its initial Kickstarter funding goal

Power A launches into Holiday with new Switch peripherals