North American gamers are about to get a new headset line to blast their audio receptors with.

Arriving at retail this month, Sharkoon’s new line of headsets will include both wired and wireless options. They also have a pretty impressive range of support to boast as they can be pretty much used with anything. 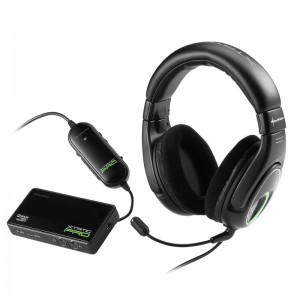 The outstanding X-Tatic Pro is a native 5.1 surround sound headset that supports Dolby® Digital 2.0, Dolby® Digital 5.1 and Dolby® Pro Logic® II formats. Each earpiece contains four speakers (for a total of eight), providing the ultimate in multi-directional sound. The detachable mic features QuickOn connection, and the newly-developed Voice Monitoring lets you hear your own voice in the headset so you can monitor your volume level. This feature can be switched on and off as desired.

Through the Dolby® Digital Sound Control Unit (SCU), the X-Tatic Pro can connect to the optical outputs from PlayStation® or Xbox® game consoles, PCs, DVD players or other HiFi devices. A second X-Tatic Pro or Xtatic Digital headset and/or any headset with a standard G9 connection plug can also be used. A breakaway cable provides in-line volume controls for all channels and chat. Both PSN and Xbox Live chat are supported.

The X-Tactic Pro is ergonomically constructed with soft ear pieces and a plush headband so it can be adjusted to the wearer’s head shape and remains comfortable for even the longest gaming sessions. The ear-encircling design absorbs external noise for maximum immersion.

If wireless is more your thing, then you might be interested in the X-Tatic Air. This little headset can actually be connected to a pair of devices at the same time. It also offers a USB connection on the charging base so you can charge up a control pad, which is a pretty nice feature. 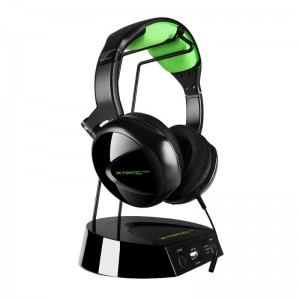 Enjoy the freedom of wireless with the X-Tatic AIR headset, developed especially for the Xbox360® and PS3™, and also compatible with Wii™, PCs, and other sound sources with RCA audio outputs. The digital 2.4 GHz transmission technology of the X-Tatic AIR ensures 360-degree reception of clear voice and gaming sound within a radius of up to ten meters, while the enclosed NiMH batteries support gaming sessions of up to ten continuous hours. An automatic sleep mode preserves battery life when out of range, and the base also features a USB port for charging a gamepad or other device.

The AIR’s closed, ear-encompassing design effectively isolates ambient noises while allowing the sound dimension of the 40 mm drives to unfold fully. Three preconfigured equalizer modes offer appropriate sound settings for different occasions. The noise-canceling, detachable microphone effectively minimizes background noise, and chat and game volume can be regulated separately to create a perfect sound balance and to ensure clear communication with other players at all times.

Connecting the AIR is quick and easy. Two separate analog audio inputs allow it to be simultaneously connected to the gaming console and attached to a TV or other audio source. The X-Tatic AIR can also be connected via USB to a PC. The headset controls are accessible on the headphones, ensuring that gameplay is not interrupted while searching for the right buttons. With adjustable, padded headband, soft ear cushions and individually adjustable ear cups, the X-Tatic AIR provides a comfortable fit even during all night gaming sessions.