The figure-maker has teamed with Dark Horse once again to make a Sin City figure in his own inimitable style. 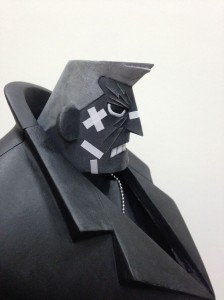 Marv is easily one of the most recognizable characters from comics period, let along Sin City where I think it’s probably safe to say that he’s the number one thug that pops to anyone’s mind when they hear the title of Frank Miller’s famous comic series. As you can see, this particular version of Marv (who has been cast as a figure before) sports his creator’s design, while still very much being his own collectible thanks to sculptor Eric So.

In fact, even the box was designed by So, and done in a way that fits right in with the gritty, noire world of Sin City.

“Besides the figure itself, the packaqe is innovative and fun” noted Dark Horse vice president of product development, David Scroggy. “Eric has come up with a gray translucent plastic blister that is the flat front of the box. The Marv figure inside is visible in silhouette. The outer surface is over-printed in white, creating the illusion of a shadowy Marv walking in the snow. This was inspired by Miller’s classic Silent Night story. It is a striking package design.”

The 13″ tall figure will ship with a run of just 950 pieces and is set to launch into stores right around the same time that Sin City: A Dame to Kill For lands in theaters, September 10th. Marv will cost you $150.00 USD.

Frank Miller’s Xerxes coming up this April from Dark Horse