Activision may have left for dead one of the sleeper hits of 2012.

Ever since Grand Theft Auto made it’s sandbox splash upon the gaming world a whole console generation ago, many games have tried to emulate its style, hoping to achieve it’s success.  Sandbox style has been seen in everything from Simpson’s games to the latest Batman, to a whole slew of series, some of which even predated GTA.  All of these games contain variants, making then different from Grand Theft Auto, all while containing the core “open world” element that franchise brought on.

The latest of those installments comes to us in a unique way, through the game Sleeping Dogs (or what was supposed to have been called True Crime: Hong Kong, had Activision not cancelled it).  Sleeping Dogs features a classic story line of an undercover cop infiltrating the heavily powerful and influential gangs.  Throughout this story arch, however, you begin to see the personal struggle your protagonist, Wei Shen, has with keeping his undercover mission together, his personal history with various members of the gang (Sun On Yee), and the conflict of his loyalty to the badge.  On top of the story arch, features a variety of cars, merchants, mini missions and everything you’ve come to expect and know from sandbox style games.Having not played much of the True Crime series, much of the game play felt new to me.  Many cornerstones from other Sandbox style games, such as collectables, mini games, side quests and much more, were still very prevalent in Sleeping Dogs.  However, there was much about this game that didn’t feel like just another GTA “wannabe”.  It felt unique in it’s approach to these otherwise “staple” concepts.

In GTA and many other games, collecting items ends up being lots of busy works, that equates to nothing more than bragging rights and a shiny trophy or achievement.  In Sleeping Dogs however,  those collectables end up giving you perks in the game.  At some point in the game, you can visit the Fight School, where you learn finding the masters 12 Jade Statues will reveal not only detailed information about Wei Shen’s past, but unlock melee fight moves that will be helpful later on in the game.  Heath Shrines are scattered through out the various wards in Sleeping Dogs, where finding a set amount will give you a heath bonus.  Finally, various blue boxes can be found throughout the game, giving the player cash or new clothing options. 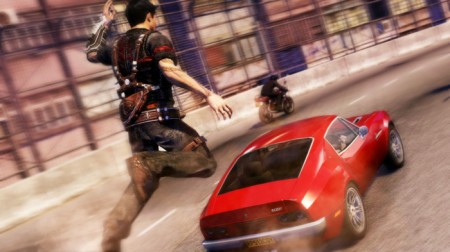 Games involving cars usually contain some sort of meant to steal said cars, especially if they are your main means of transport.  While Sleeping Dogs does contain the traditional yanking someone out of their car, shouting something derogatory and driving off in a burst of speed, you also have other means to nab vehicles as well.  During a high speed chase, or even whenever you feel like really, you have the option of jumping from your vehicle onto another vehicle (except motorcycles, no midair heists of those) and stealing it.  There are a couple of missions and side quests that require you to make use of your heist abilities in this fashion.  With enough Police Cred, you also have the ability to steal stationary cars without setting off an alarm, making your get away a lot more smooth.

Combat in Sleeping Dogs will be a welcome familiarity to those who played Square Enix’s other Sandbox hits, Arkham Asylum and Arkham City.  The combat system is heavily melee based, with the occasional gun play.  Players can pull counters, string together combos, throws, mix up their attacks through light and heavy, and even use objects such as pipes, crowbars, purses and butcher knives; giving you a weapon arrangement as though it was Golden Axe, minus the fire breathing dragon.  Certain perks will also give you new combos and stuns. 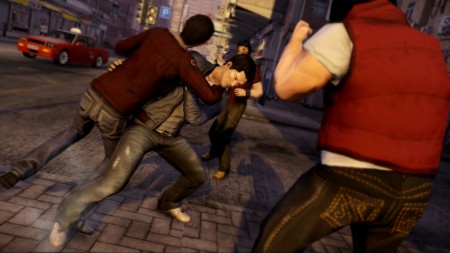 Sleeping Dogs also features a very unique leveling system. Because your main guy, Wei Shen, is a cop infiltrating the triad gang, he gains perks from both being a cop and being a gangster.  Triad perks will aid the player in areas such as gun recoil and such, while Police perks allow you such awesome abilities as grabbing weapons out of the back of squad cars.  Furthermore, you have a 3rd perk tree called Face perks, which grant your character health and the ability to wear certain clothing options.  Clothing choices can also grant you small perks such as damage bonus or a health bonus.

One thing that has always bugged me about the Grand Theft Auto series was the story lines.  They were interesting enough, but they never quite sucked me in, never quite had enough ethos or made me empathize with the protagonist.  They always seemed to drag on forever and forever, while sprinkling in unnecessary social aspects.  In Sleeping Dogs however, none of those complaints ever arise.  The writing for the story is fantastic, keeping the player involved and full of plot twists to keep things from getting too dull.  There is also a dating aspect within the game, but not such a burden that you want to snap your controller.  Dates will usually grant you perks like money or clothing.  You also don’t have an annoying cousin constantly demanding your attention. 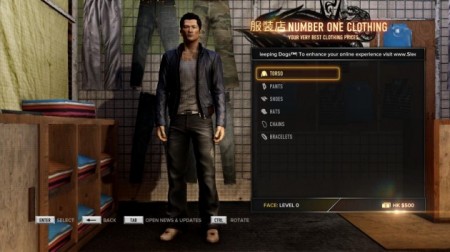 This game doesn’t come without a couple of complaints however.  For one, unless you are concerned about fancy new cars, clothing, or buying food, money is pretty useless in this game.  You can just as easily get away without spending much money at all in this game, instead hoarding you wealth for some imaginary purpose.  Cars are only able to be kept in your garage if you have purchased them as well, not allowing you the ability to steal vehicles and store them in your garage.  The game contains several social challenges as well, allowing you to compete against your friends in areas such as safe driving, jump distances and others. However, the stipulations on these are not well defined, as what constitutes as time for safe driving.  Parts of the social challenges seemed very broken.

Sleeping Dogs is going to get lost to some amongst such hits as Black Ops2, XCOM: Enemy Unknown, Assassins Creed 3 or Dishonored.  But it’s a game worthy of everyone’s time. It won’t be fighting for Game of the Year, but definitely worth the purchase and 15+ hours of gameplay one will get out of it on story mode alone.  Sleeping Dogs features all the goodies players have come to love in many open world adventure games, while adding its own unique twists, like driving on the wrong side of the road (depending on where you live as Hong Kong was a territory of England for a long time…).  Combat is especially fun with its Batman style combo systems, but still allow you some menacing gun play. Pork Buns, gang violence, police brutality and an amazing story arch await those playing this fantastic sleeper title.

Inscryption review — a rogue-lite with a twist