Slender: The Arrival looks to bring the next chapter in this haunting story from creator Eric “Victor Surge” Knudson.

Players will learn more about the shocking tale of two friends who have become entangled with the urban legend of the Slender Man, as they navigate the dark woods while avoiding the faceless creatures lurking in the shadows. Find clues through the levels and help find the main character’s missing friend. 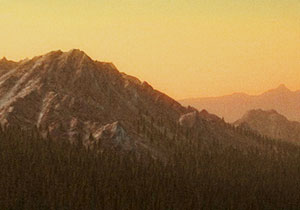 This Internet sensation, or creature (depending on who you ask), is ready to make a scare on consoles. Slender Man was born on the Internet though. What started as a scary tale on a forum slowly developed into this decade’s boogie man. All this commotion has people asking, who is the Slender Man? What is the Slender Man? It seems as though he is everywhere. From the headlines in the nightly news to PC and consoles games, Slender Man is now a part of popular culture and the team at Blue Isle Studios has decided to use the idea of the Slender Man and create the next chapter in his story.

This game is a story-driven narrative and takes place in the pristine mountains. The story starts off with the main character, Lauren, who has decided to take a trip up to see her good friend Kate. Lauren does not want to miss a second of her adventure and decides to use a digital camcorder to document her trip. The game opens up as Lauren arrives to Kate’s house and the sun can be seen setting across the mountainside. The weekend is setting up to a pretty amazing adventure. Then Lauren finds Kate’s house.

All the doors and windows are open and no one is home. It is clear something awful has happened as the house is in complete disarray. Dishes are thrown through the house and writing can be found on the wall. After a bit of exploring it is clear something sinister took Lauren’s friend. The only clue left that remains in Kate’s room. Something Lauren finds inside will start her on a journey to rescue her friend. With that Slender: The Arrival actually has a great set up, but then the game falls off its path and it is up the player to navigate the dark forest ahead. 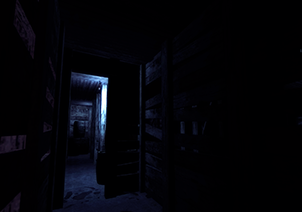 There is a slight learning curve to Slender: The Arrival. There is no tutorial to the game and players are expected to learn while playing. While there is not a lot to the gameplay of Slender: The Arrival really, there are also no indicators to help steer players in the right direction. Now 99 out of 100 times, no one will want their hand held and to be told where to go in a horror game, heck, and part of the horror is not knowing what’s happening or where you’re really going. That’s different than ‘getting lost’ though.

And getting lost is easy in this game, and it happens frequently while looking for clues to Kate’s whereabouts. Following the clues will lead Lauren all over the mountainside. From abandoned construction sites to dilapidated cabins, the woods are full of interesting places for Lauren to explore.

At these sites the player will have to find clues left behind as to how to find Lauren’s best friend. Though Lauren is not alone in the woods. There is something else out there watching her.

When players encounter the Slender Man, or one of the other faceless creatures, they have two choices, either shine a flashlight on the creature or run. There is no combat and no real way to stop the Slender Man. Trying to fight the Slender Man will certainly end in death. The flashlight is a nice tool to use, but it too has its limitations. Being stuck in a sandbox with an immortal murderer can be tense, but after some time it became a sort of funny game of cat and mouse. It is these hang ups that make me question, just who is the Slender Man and why should I care? So lets get back to that for a minute, because there’s a real and pretty interesting history there.

The Slender Man, the real Slender Man, is an Internet creation, born in a twisted  forum. Eric “Victor Surge” Knudson created the Slender Man years ago in a photo editing contest. Knudson photo shopped a tall faceless figure dressed in a black suit and then place this creature in old photographs. His pictures were widely accepted and suddenly a new phenomenon was created. 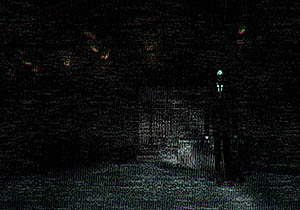 Internet memes and short stories exploded across the web. What was once a small confined story had become a full-blown viral event. The boogie man had become Slender Man and kids were spreading his legend throughout millions and millions of outlets online. This much publicity was bound to create more than just a scary bed time story though.

Two girls from Waukesha, Wisconsin are in trouble for attempting to stab a third woman 19 times. During questioning, it was revealed the two girls believed that by killing the third woman, they would become proxies of the Slender Man. This would also lead the two women to the Slender Man’s cabin in the woods. It seems as though the Slender Man has become such a riveting individual that he is now convincing two teenage girls to “carry out” his plans.

I bring all this up because by understanding the origins of Slender Man, gamers can have a better experience actually playing the game. Knowing a little bit more about the enemy before you dive in, will help push the story along, what there is of it. And you’ll need all the enthusiasm you can muster as the first part of Slender: The Arrival can be slow and arduous journey. The ramp up to finally seeing the monster in question can equate to the first game of peekaboo you played as a child. It is scary the first time, but each subsequent time is less scary until it becomes the aforementioned funny game.

The gameplay in Slender Man: The Arrival is rather simple. The whole game is a first-person experience, told through the camera lens of a digital camcorder. The game takes on the style of the Blair Witch story, with its ‘found footage’ theme. A rather cool gameplay feature though that I have to mention, is that any time the Slender Man is near, the camera becomes distorted and the screen is overcome with static snow. As I mentioned earlier, the only weapon against the Slender Man is the flashlight. Players can focus a beam of light at the creature and burn him away… momentarily. Slender Man always comes back to haunt Lauren.

Playing Slender: The Arrival is a fun experience for people familiar with the stories surrounding Slender Man. I had a prior knowledge myself, so getting into the game was a little easier. I suspect though, that people unfamiliar may have a hard time getting into the almost nonexistent story.

Since the narrative here had no preface it was hard to care at all about Lauren and Kate, which actually made it hard to care about playing Slender: The Arrival.