The unkillable merc is already a huge part of the Valiant U with the raging Harbinger Wars, but that’s nothing next to what’s coming up for the character.

Not only will Bloodshot be getting a special ‘zero issue’ soon, but the name of his book will be getting an alteration as well as he takes lead to command the H.A.R.D. Corps. There isn’t much info yet to go on for Bloodshot fans, but these new teasers released by publisher Valiant should make followers of the nanite-powered former Harbinger hunter pretty happy indeed.

The zero issue will be heading to stands from the creative team of writer Matt Kindt (who’s been on fire as of late) and artist CrissCross and will presumably tackle the origins of the character. From the looks of the cover, it seems as though there might be a bit of a ‘back catalog’ of ‘Shots that it’ll be exploring as well. 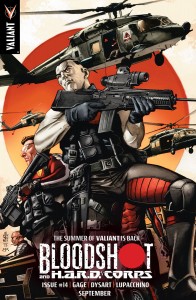 As for Bloodshot #14, which now appears as Bloodshot and H.A.R.D. Corps #14, it looks as though Bloodshot will be leading the team of enhanced soldiers into battle against super-powered menaces for a while at least. This one comes from your usual Bloodshot suspects with the team of Gage, Dysart and Lupacchino- so you know it won’t be one to miss (not that it ever is).

Related Article:  The friends and foes of Spidey get cataloged in the new Ultimate Spider-Man character guide