Space Goat Productions is proud to announce they will be publishing Ted Naifeh’s upcoming superhero comic book: Heroines. The celebrated author behind Courtney Crumrin, Princess Ugg, and Night’s Dominion will be bringing his take on modern superheroes. 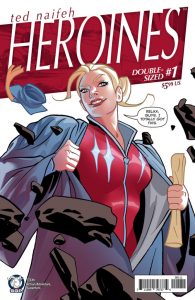 A would-be superhero tries to assemble a team of like-minded heroines by placing an ad on Craigslist. Enter a jaded veteran and a disgruntled assistant are just two of the responses Marcy gets in her attempt of a new super team.

The 7-issue comic book mini-series Heroines is scheduled to be released in May with a special double-size #1 issue. It can be pre-ordered at your local comic book store, Comixology, or at Merchgoat.com

Related Article:  Dead Space review -- It's behind me, isn't it?