Not all Spider-Men (or Women) from throughout the multiverse are all that heroic. Some are actually pretty horrible… things. 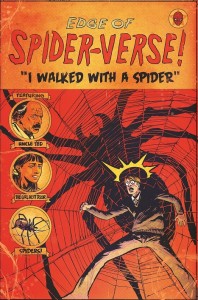 This October, experience the horrors of the Spider-Verse as every Spider-Man ever prepares for multiversal war! Today, Marvel is proud to present your first look at EDGE OF SPIDER-VERSE #4 – the next terrifying chapter in the blockbuster 5-issue miniseries showcasing different spider characters from alternate universes! From critically acclaimed novelist Clay McLeod Chapman and artist Elia Bonnetti comes the most terrifying tale of Spider-Man yet.

It’s a familiar story. A radioactive spider bites a high school science nerd. Tormented by his classmates at school, disregarded by his family at home – Patton Parnell is already somewhat of a monster. Only now with all the power and none of the responsibility, venture deep into a universe where the story you know becomes as horrific as possible.

“My editor Ellie Pyle and I started chatting about the idea of re-envisioning the origin story of Peter Parker/Spider-Man,” says Chapman of his horror-themed Spider-Man in an interview with Marvel.com. “What if we approached one of the most beloved beginnings of a super hero and looked at it through a completely different lens?”

As the Spider-Verse inches closer, prepare for a terrifying spin on the tale you’ve always known. Get caught in the web this October in the chilling EDGE OF SPIDER-VERSE #4!

Plus, don’t miss out on these exciting Edge of Spider-Verse tie-in issues of your favorite ongoing series:

For more on Spider-Verse, visit Marvel.com and join in on the conversation on Twitter using#SpiderVerse.

Edge of the Spider-Verse is really getting interesting with some radically different views on the classic character. This isn’t just a spread of different costumes and a few female-spiders thrown in to shake things up, we’re actually getting some extra-cool variants on Spidey including sci-fi and now horror-themes. Though, now that I think about it, I don’t know how helpful old Patton Parnell here is going to be to the rest of the Spidey’s in the final battle against villain Morlun.

Have to say too, that I’m really liking that throw-back cover. Nice and pulpy. Edge of the Spider-Verse #4 will hit the shelves on October 1st from the team of Clay Mcleod Chapman and Elia Bonnetti.