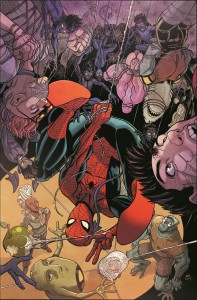 This December, meet the Jean Grey School for Higher Learning’s newest faculty member…Peter Parker?! That’s right, it doesn’t take an X-Gene to sculpt young minds from the hallowed halls of the JGS, and ol’ webhead is joining the payroll this December in SPIDER-MAN & THE X-MEN #1! Rising star creators Elliott Kalan and Marco Failla settle Peter Parker into his role as the JGS’s newest Guidance Counselor. Keeping young mutants on the right path might be a reward unto itself, but Spidey has other plans.

“He’s there because Wolverine asked him to do it, though being a teacher isn’t the extent of the mission” says writer Elliot Kalan in an interview with Marvel.com. “Before Wolverine dies, he had a suspicion that something was amiss at the school and that one of the students wasn’t what they seemed. Only he didn’t know which student. It’s Spidey’s job to find the truth – though he can’t help but hope to also have a positive influence on the lives of the students.”

Only the denizen of the Jean Grey School aren’t exactly down with their newest employee. Especially when he leads a group of the younger students into a confrontation with Sauron and Stegron, the Dinosaur Man! Time for the Wallcrawler to show his stuff as a hero and as a teacher. Be there when Spider-Man shepherds the next generation of mutants as they struggle to survive high school and a villain team-up 65 million years in the making when SPIDER-MAN & THE X-MEN #1 swings into comic shops and onto digital devices this December!

For more info on Spider-Man & the X-Men, read the full interview with Elliot Kalan tomorrow on Marvel.com.

Okay, so move past the urge to disregard this one for a second and really look at what Marvel is doing with Spider-Man and the X-Men. Yes, it’s definitely another way to get Spidey (who doesn’t have a massive catalog of monthlies on the market right now) into another comic on the racks, but it’s more than that.

You definitely have the Wolvie legacy there to drive the book and explain why Spider-Man is there, but there’s a creeping backstory here too where the school itself might be compromised and only the web-head can sniff out what’s what. There’s also bound to be some kind of sub-narrative about how Pete isn’t a mutant and he’s teaching a school of mutants. Could be some potential nastiness there, though I wouldn’t imagine thing’d go all that well for any of the kids should they choose to step up to a veteran hero like Spider-Man- not that it wouldn’t be interesting.

Spider-Man and the X-Men #1 hits racks this December from the team of Elliott Kalan and Marco Failla.