Original Sin reveals that Peter Parker wasn’t the only one bitten by that radioactive spider, but just who is Silk and why haven’t we seen her pop up anywhere in the Marvel U in all these years? 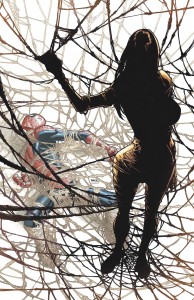 A bite from a radioactive spider forever set a young Peter Parker on a path that would transform him into the greatest super hero the world has ever known, but that’s not the whole story. This July, the New York Times Bestselling Creative team of Dan Slott and Humberto Ramos uncover the Earth-shattering truth about that destined encounter in July’s AMAZING SPIDER-MAN #4, a tie-in to Original Sin!

On that fateful day, Peter Parker wasn’t the only one whose life changed forever. The radioactive spider that created Spider-Man bit someone else too. Someone who was led down a different path – a darker path.

“Why was this kept from Peter?” asks writer Dan Slott, in an interview with Marvel.com. “A good question to ask is ‘Who is keeping this from Peter?’ What parties would know about the existence of this person? Why haven’t we seen her all this time since the events of Amazing Fantasy #15?

“If you’re going to do a big story like Original Sin, where everybody’s got such a big secret,” Slott continued. “You go big or you go home.”

All will be revealed when Silk’s story is fully revealed as the Amazing Spider-Man crashes headlong into Original Sin! And seeds sown here blossom into cataclysmic results for the webslinger in the highly anticipated Spider-Verse later this year! With Peter Parker’s life about to be turned upside down, no fan can afford to miss the first appearance of Silk this July in AMAZING SPIDER-MAN #4!

“Go big or go home” indeed. Changing the past is something that Marvel is banking on in a big way in Original Sin in general and as retcon’s go, this is a big one. Not only are you tying a character into the mythos of one of the biggest superheroes in Marvel’s pantheon, but you’re really altering what went down all those years ago. Kind of a big deal.

For some reason too, I’m just not sold on Silk. Granted we haven’t seen really anything about her or her past as of yet, but there’ve been so many spider-beings and heroes and villains over the years that have riffed on Pete’s powers and abilities already, it just seems like there’s nothing else to add to that menagerie. Personally, I hope I’m wrong and this turns out to be a terrific arc, writer Dan Slott definitely does have the ability to pull off something awesome, we all know that.

So I guess this is me, ,reserving judgement till I get an issue in my mitts and start reading about Silk, Spidey’s sort-of sister when Amazing Spider-Man #4 swings onto the racks this July from the spider-team du jour of Dan Slott and Humberto Ramos.