IDW’s latest Trek super-series, Star Trek: Waypoint is about to get its first collected edition.

I’m a pretty big Trek fan. Okay, I’m a monster Trek fan. But even so, I’ve somehow avoided readying IDW’s newest Trek comic series. The book sounds pretty impressive too, so I’m at a loss as to how that’s happened.

Star Trek Waypoint isn’t the usual book based in Gene Roddenberry’s universe. It doesn’t just follow one crew or set character. Instead, Waypoint actually functions as an anthology comic, with a different focus each issue. Characters from “Star Trek: The Original Series, Star Trek: The Next Generation, Star Trek: Voyager, Star Trek: Deep Space Nine, Star Trek: Enterprise, and more” are all included. 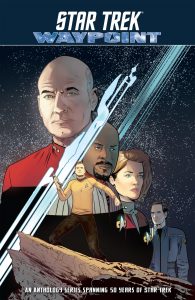 “From STAR TREK: VOYAGER to STAR TREK: THE NEXT GENERATION, STAR TREK fans are passionate about their favorite TV series, and always ask me for comics set in that universe,” said series editor Sarah Gaydos. “WAYPOINT decidedly delivers on this, thanks to the incredible work of some of the best talent in the comic book industry.”

So, no matter what kind of Trek fan you might be, you have a good chance of finding your favorites included here. Oh, and the talent on board for the series is uber-impressive.

A collection of the first six issues of Waypoint, the graphic novel “volume one” collection is set to hit stores tomorrow.