Looking for a new Darth Vader helmet? We won’t ask why, don’t worry. But we will tell you that there’s a pretty awesome one coming up pretty soon from Hasbro. It’s a part of the Black Series, and might be the most detailed, wearable Vader helm ever. 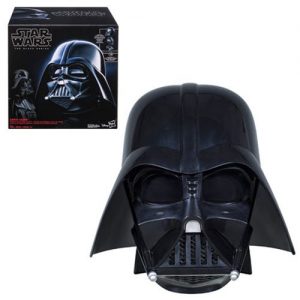 Very far from the ‘costume store’ Darth Vader helmets of the past, this one sports a “detailed interior”. I assume that means it has all the tech-y bits that are on display in Return of the Jedi, when Luke removes his father’s mask. There are no promo shots of that unfortunately, but if that’s what you get with this, then it’s a first.

The helmet is also apparently pretty big, comparable to the one that actor David Prowse wore in the original trilogy. It’s also got a stand, and a cacophony of sound effects. Put the magnetically-attached helmet on, and you’ll hear a “sealing” effect. Take it off, and it’ll sound like it did in Jedi. And it’s also got breathing sounds, can’t forget that.

The helmet is marked to go on sale next month over at our pals Entertainment Earth, and will run you $109.99 USD. That’s not cheap, but honestly not bad either, for this kind of thing.