Since launching a long time ago in a galaxy far, far away, Zen Studio’s Pinball FX2 has quickly become a huge commodity in the Xbox Live Arcade marketplace. With its vast array of tables, along with stellar gameplay, it’s easy to see why.

Some of these tables featured in Pinball FX2 are Zen Studios originals while a lot of them are based on licensed franchises, ranging from other games like Plants Vs. Zombies and Street Fighter, to their huge collection of Marvel tables. However, one of the biggest franchises ever has teamed up with Zen Studios to create some of their more unique tables yet.

The highly anticipated Star Wars table pack comes to Pinball FX2, featuring 3 tables that will tickle the fancy of Star Wars fans both young and old. This package features an Episode IV themed table, a Clone Wars themed table and one featuring the cult hero bounty hunter, Boba Fett. Each table comes with its own unique design and challenges to boot. None of them are particularly easy, some of them even mercilessly unforgiving. All of them, however, will have you wanting for more.

The artwork put into all three of these tables is absolutely fantastic. With the Episode IV table, players are greeted with a 1970s style pinball table design equipped with a plethora of flashing words on the board along with Zen Studio’s signature animated characters. The Boba Fett table has a slight Steampunk feel to it, based in many of the earthy tones everyone’s favorite bounty hunter adorns. Finally, the Clone Wars table features the art and characters of the animated series, delightfully colorful featuring many characters from the show. 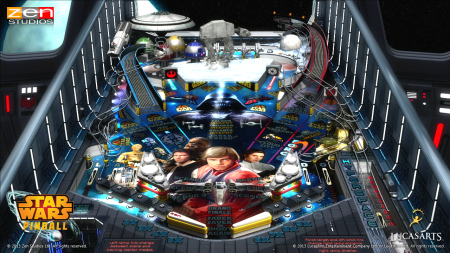 All of these tables feel to be some of the most challenging tables yet. In the play-thrus I ran, I found the Episode IV table to be the most challenging. Left with few options for scoring, in the retro pinball fashion, players must get creative with their ball placement , not so much able to score points off of sloppy play. The Boba Fett table, while not nearly as difficult, does have its own particular challenge in that it isn’t as flashy as your traditional table. Rather, players will have to pay close attention as to what is what amongst the shades of brown and green. The Clone Wars table is probably the easiest of the three, though Im not nearly the Pinball Wizard to amass a ridiculously high score.

Like with most other Zen Pinball tables, the staples of missions, 3D characters and the unique perspective of a digital pinball table are all present. Many of the Star Wars favorites will be features as moving figures across all tables. The mission set in the Episode IV table is particularly interesting, as it allows you to “play” iconic scenes from that movie, with the backboard changing the scenery to correspond to that particular scene. The Clone Wars table also features an array of missions, though not nearly as memorable as the Episode IV table. Additionally, players will have all the Pinball FX2 features such as leaderboards and high scores amongst your friends to see who has the best Pinball Jedi powers.

While players are greeting with various voices from their favorite Star Wars characters, I don’t believe they actually use the clips from the movies, nor the original actors. Rather, the quotes sound like they’re done from voice actors mimicking those actors, sometimes rather poorly. The Boba Fett table adds more dialogue than the infamous bounty hunter says in the entirety of the Star Wars movies. 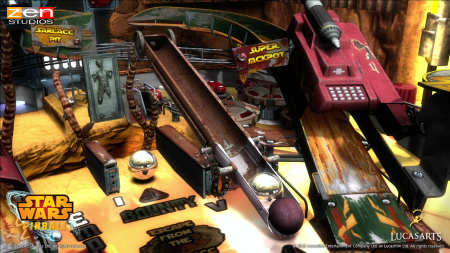 Star Wars fans and Pinball fans alike will enjoy the difficulty and beauty of these tables. Whether it’s the changing scenery in the background of the Episode IV tables, the unique shading of the Boba Fett table, or the particularly interesting way the Clone Wars table launches the pinball into the playfield, each table brings its own unique flare while staying true to the Star Wars universe. Pinball fans will enjoy the hearty challenge, while Star Wars fans will geek out to the appropriate use of Lightsabres on a Pinball tables as well as their favorite quotes from the Star Wars franchise. Despite which side of the fence you lie, you really ought to pick up Zen Studio’s latest Pinball tables.

Where the hell is our Cyberpunk 2077 review?

Ghostrunner sprinting onto PS5 and Xbox Series X in 2021