I think ‘it’s about time’ sums it up nicely. 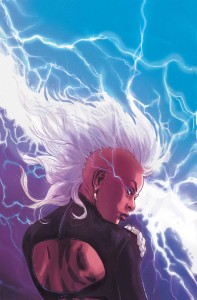 Marvel is pleased to present your first look at STORM #1 – the highly anticipated new series thundering its way into comic shops this July. From New York Times Bestselling author Greg Pak and artist Victor Ibanez comes a new beginning for the heart and soul of the X-Men as she flies solo for the first time in her very first ongoing series!

From street urchin in Cairo to the Queen of Wakanda to Headmistress of the Jean Grey School and everything in between – she is a hero with no equal. Her desire to make the world a better place is unmatched, even though that world that hates and fears her. On her mission to spread goodwill and embody Charles Xavier’s dream in her own way, she will stand alongside new faces and familiar friends – and come face to face with more than her share of enemies.

But you cannot stop her any more than you can defeat the wind. She is a force of nature. She is Storm! And the skies will tremble at the sight of their namesake. No fan can afford to miss this eagerly anticipated debut issue – so get swept up as STORM #1 rolls into comic shops and digital devices this July!

There latest in the current mini-crop of mutants to get their own books (Magneto and Cyclops being the others), Storm’s solo debut has been a long time coming indeed. The character debuted back in the ’60s with the team and hasn’t really ever gotten a shot to hold her own.

With writer Greg Pak and artist Victor Ibanez on board, the book is looking like a winner and with the upsurge in popularity in the X-Men in general as of late, there should be plenty of readers interested in taking a look. Hopefully the mistress of the wind and rain sticks around for a long time (though personally, I’m hoping the mohawk doesn’t).

Storm A Castle In The New Shadow Of War Gameplay Trailer