This is it spider-fans, the big conclusion to the Necessary Evil storyarc that has seen Spider-Man 2099 ‘teaming’ with Superior Spidey in a story that’s set to alter the future of the Marvel U. 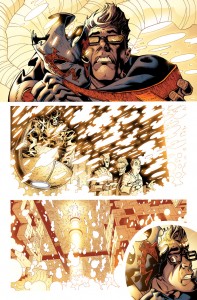 Marvel is pleased to present your first look at the stunning conclusion of Necessary Evil in Superior Spider-Man #19, from critically acclaimed creative team of Dan Slott and Ryan Stegman! Spider-Man 2099 has arrived from the splintered fringes of time —and the Superior Spider-Man isn’t happy about it! When the dust clears, which Spider-Man will truly be “superior”? But as these two wallcrawlers come to blows, which Spider-Man will be responsible for changing the fate of the Marvel Universe for years to come? Don’t miss the Earth-shattering developments for both Spider-Men…and the future!

Even if you’re one of the Spidey fans who aren’t into SpOck, you’ve gotta love this arc just for Miguel O’Hara. Spider-Man 2099 has to be the single most underutilized (and yet fan-favorite) characters in comics and it’s been great to see him back in action in the pages of Superior.

Personally, I’d love it if he stuck around and became the Spider-Man of the present time Marvel Universe, but I don’t know how likely that is with the Peter/Ock switcharoo still playing out. One can dream though, can’t one?

Look for Superior Spider-Man #19 to swing onto shelves on October 16th from the Slott, Stegman and Marvel Comics. Oh and be on the look out for a special variant cover by none other than J.G. Jones.