The Ninja Turtles are back in their first live-action movie since 1993. 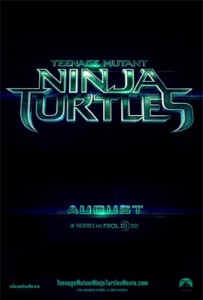 So just to couch this review, I’m a big fan of the Ninja Turtles and have been since they premiered on TV in the 80s. That was my introduction to them, though I would soon thereafter get into the original comics and the books published by Archie Comics, which were super faithful to the TV Turtles. That was a great, and underrated, series for those of you who remember the cartoon TMNT and still love those versions of the characters by the way.

Now of course, there’s a brand new cartoon on the air, that runs on Nickelodeon. It’s almost as popular as the original show was and, according to a buddy of mine, way more mature in tone. While you’re not going to see anything too violent on it, there are deeper story lines and better writing on the whole than anything that ever aired back in the 80s (or the early 2000’s cartoon for that matter). Personally though, I’ve not seen it… yet. With the rampant popularity though, it only makes sense that Nick would want to bring back the big screen version of the heroes in a half shell.

And this brings us to the new motion picture Teenage Mutant Ninja Turtles, that was released just last week. From Platinum Dunes, Nickelodeon Movies and Paramount Pictures, and directed by Jonathan Liebsman and produced by Michael Bay (of Transformers fame), the new movie has all the basic themes of the Turtles that you know and love, but in a completely different way. I’d actually say, too different. But is it any good? Well, if all you go by is box office, then yes- it’s amazing. The flick already beat out Marvel’s Guardians of the Galaxy for the number one spot at cinemas and a sequel has been greenlit by Paramount. Yes, already.

But let’s put aside the cash-flow for a second and really look at this movie from a fan’s perspective. While the Turtles aren’t aliens in the new TMNT (which was heavily rumored), these are not the green teens that you’re used to seeing in action.The film isn’t based on any of the previous or current incarnations of the TMNT, but instead is an amalgamation of all of them, with a liberally applied dose of ‘new’. While I’m all for seeing new interpretations of existing characters, seeing those new ideas come at the expense of what makes the characters great to begin with doesn’t sit so well.

The plot is a simple one here. NYC is under siege by the Foot Clan and their villainous leader, Shredder. Shredder (who is never referred to by his real name, Oroku Saki) wants to reclaim the glory of his clan and basically make people’s lives miserable. There’s another element to this, but it’s integral to the plot, so I’ll leave it out. Oh, and there’s another villain too, but don’t get too excited because he’s as vanilla as bad guys come and honestly shouldn’t have been included at all here, because more screen time for Shredder would have been greatly preferred.

Enter the Turtles, who are intro’d way later in the movie than they probably should have been and April O’Neil, played by Megan Fox. Fox and Will Arnette, who plays her camera man Vernon Fenwick (who you might actually remember from the cartoon) eat up the majority of the screen time here and we see precious little of the Turtles till about halfway through the film. If this sounds familiar to you at all, it’s probably because the same affliction applies to Bay’s Transformers series. Even though he’s producing here and not directing, the same formula of centering the story on the human characters is very much in effect. As a fan, it’s borderline maddening as April (and yes, I realize she’s a major character) and Vern aren’t the reasons anyone would go see this movie.

Related Article:  Tarzan on the Planet of the Apes (Trade Paperback) Review

And it’s a shame as I actually liked the look and personalities of the Turtles here too! As surprised as I was, the redesigns give each of them a distinct character all their own- way more than a simple differently colored bandana could. I do think they went a little over the top with Donatello’s tech-heavy look, but otherwise they’re very cool and well put together. Each one comes off pretty great too, with all of their personalities shining through. Don gets another nod here though as, much like with his gear, his nerdiness is a little over done. I have to say too, that if they had a little more screen time, I feel like the Turtles could have been way more developed and fleshed-out individually. I liked what they did, but it just could have been that much better with less April and Vern and more Raph, Leo, Mikey, Don, and even Splinter.

When the action finally kicks up, it’s pretty entertaining. All of the fight-heavy scenes are enjoyable (for the most part) and the CGI is excellent on the Turtles as well as Shredder’s costume, which is pretty darn awesome and very different than any other version of him that we’ve seen. Unfortunately, I have to bring up the altered narrative here again. Although I really hate spoiling anything in reviews, I have to mention that the movie changes so much that some of the action scenes lack all sense of gravitas thanks to the removal of key plot points that the original comics and cartoon featured. One fight in particular, between two major characters, should have a way heavier feel than it does. It just kind of falls short thanks to any and all history between these two combatants being wiped away from the movie universe’s fiction and it comes off as a letdown.

Related Article:  Deals: Pick up Guacamelee on GOG and get a side of Mutant Blobs for free

One thing I have no problem with though is the voice work. All four actors (Johnny Knoxville, Alan Ritchson, Noel Fisher, and Jeremy Howard) do an excellent job as the individual Turtles and their voiceovers go a long way towards making the fab four actually seem different and unique. The sets are also solid throughout and a fair amount of NYC is featured, which is cool.

Although it might not seem like it from the tone of this article, it’s tough here to be hard on this movie. It’s done so very well in its first week in theaters after all, but even so, it’s just not a movie that I feel hardcore fans of the Teenage Mutant Ninja Turtles could possibly enjoy in any meaningful way. It misses most of the marks, leaves out huge (majorly important!) pieces of the core fiction, and otherwise is just a crazy, off-the-wall action movie with a Ninja Turtles coat of paint.

Even so, we already know that were getting a sequel, so hopefully there’ll be more of what makes the TMNT so interesting in that film. I don’t have high hopes though, and to be perfectly honest, fans should be looking elsewhere for their TMNT fix.