Retro-style arcade shoot-em-up Teslapunk evokes memories of those who have come before. 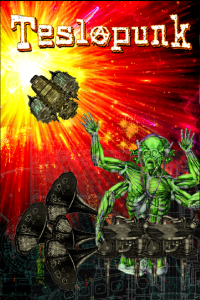 I can’t speak for everyone, but this game brings back memories of games such as Asteroid and Ikaruga from years past. 2-D shooters in all their glory.

In Teslapunk, you are tasked with defending the Earth against Emperor Zangórax, a popular Martian DJ by night, while a frantic invader by day. Enter Nikola Tesla. Only Tesla and his powerful creations can stop Zangórax.

Teslapunk provides two gaming modes: arcade mode and survival mode. Arcade brings you six levels of bullet-dodging, bullet-cancelling, enemy-killing excitement. Using a feature called Voltage Burst, you can cancel bullets, but this comes with a cost: your difficulty is increased as a result. Boss battles await you in the shadows.

Survival mode plays just as it sounds, fight against endless waves of enemies. Collect drops as you go, in hopes of powering up your ship.

With colors that remind me of Oddworld: Abe’s Oddysee, this game looks like a lot of fun. Teslapunk arrives for XBOX ONE on October 7, 2015, as part of the [email protected] independent developers program.