Marvel Comics preps for 2014 with an all-new round of books. 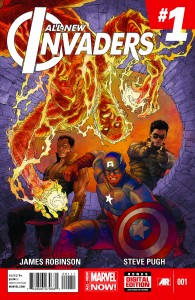 Not only does the current line of comics move forward into the New Year for 2014, but Marvel has a special .NOW series (think of them like ‘point one’ issues) that are designed as entry points for new readers.

The initiative starts up in December with Avengers #24.NOW (yep, that’s the complete title) from Jonathan Hickman and Esad Ribic. Marvel promises bigger everything for this next round of books and even more clean entry points for new readers (which is always nice).

“All-New Marvel NOW! ushers in 2014 with bold new launches featuring the greatest characters, the greatest creators, and exciting storylines that provide clean entry-points to all ongoing series,” explained Axel Alonso, Editor In Chief, Marvel Entertainment. “With new voices joining our creative chorus, and new heroes stepping into the spotlight, the Marvel Universe is about to expand in every way possible.”

So what’s on the blotter? Some very cool stuff, including one that I’m personally really looking forward to – All-New Invaders #1.

As usual, all of the new books come with codes that’ll get you a free digital edition of the physical book. Not as usual, select editions will include codes that will get you “the entire first collection of that series ABSOLUTELY FREE!” Pretty cool that.

Be there or be square, when Marvel NOW! reloads this December.