The Armor Hunters alone know the dark secrets of the X-O armor’s history, and they’re here to take it from Aric of Dacia. 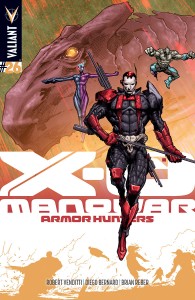 Abducted from his own time by a vicious alien race, the courageous Visigoth warrior known as Aric of Dacia spent years in slavery among the stars before escaping with his captors’ most feared weapon – the X-O Manowar armor. Now, stranded in the modern day, the world’s most primitive man also just happens to wield its most powerful weapon. But what is the X-O Manowar armor? And who before Aric of Dacia dared to wield its incalculable power? The ARMOR HUNTERS hold the key to the armor’s untold history and – one way or another – they’ll crush anything that dares threaten their secret.

Not really ‘bad guys’ per say, the Armor Hunters are nonetheless something of a mystery for the Valiant Universe and an Earth that’s about to be besieged by them. All that Valiant is really saying right now is that these galaxy-spanning hunters of sentient armor want the X-O suit from Aric, and they won’t stop at anything to get it.

Of course, with a Visigoth warrior who’s laid waste to an entire world wearing that armor, it’s probably pretty unlikely that they’re going to get their way with one heck of a scrap. Insert the rest of the heroic corner of the Valiant U and you’ve got the makings of a massive crossover event that shouldn’t be missed by fans of the publisher and X-O fans in particular.