Spidey fans, get ready for some… spectacular news. Spectacular Spider-Man is back.

This summer, the one-and-only Spider-Man returns to his friendly neighborhood! Today, Marvel is pleased to announce PETER PARKER: THE SPECTACULAR SPIDER-MAN, the new ongoing series from superstar writer Chip Zdarsky (Star-Lord, Howard the Duck) and legendary artist Adam Kubert (Avengers, X-Men)! A companion to the best-selling Amazing Spider-Man series, these two blockbuster creators are taking Peter Parker back-to-basics in a new series bursting at the seams with heart, humor and over-the-top action!

“With [Peter Parker: The Spectacular Spider-Man] we’re using the same Spider-Man continuity, but shifting the spotlight back to his NYC environment and supporting cast,” says series writer Chip Zdarsky speaking with Entertainment Weekly. “But even though we’re pushing to make it a more personal book, we’re still going to have big adventures with ramifications that’ll be felt in other books. If I had a true mission statement for the book it would be: ‘Have fun, have heart, have stakes.’” 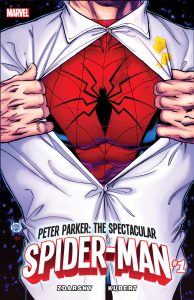 He’s a webslinging, wallcrawling wonder. He’s the world’s greatest super hero. He’s the unluckiest guy on the planet. He’s Spider-Man! Following his globetrotting adventures, it’s big heroics in the Big Apple as Peter Parker returns to the city that never sleeps! Be there as he swings between giant skyscrapers, squares off against his iconic rogues gallery and still manages to be late for that date he had planned!

Fans can swing into action this June when Zdarsky and Kubert bring you PETER PARKER: THE SPECTACULAR SPIDER-MAN #1 – available wherever comics are sold. Can’t wait that long? Don’t’ miss your first taste of this highly anticipated series on Free Comic Book Day (May 6th) with a special 10-page story from Chip Zdarsky and Paulo Siqueira!

The return of a classic

First, I love it when Marvel (or any publisher really) brings back a classic book. Especially one that’s been gone for a while, and that fits Spectacular perfectly. A long running series that covered 1976 through ’98, Spectacular ranks right up there with the greatest Spidey runs of all time. Sure it doesn’t have the name recognition of an Amazing, but it’s almost as historic.

Related Article:  Assassin’s Creed is getting a live-action Netflix series

It was also one of my favorites from when I was a kid, so to see the name returning is a joy. I really like the more personal bent to it as well. I’m sure there’ll be some big stories in here, but to see Pete coming back to NYC, and have the book framed by smaller tales, well that’s just all kinds of awesome. And it plays to what I’ve always liked best about Spider-Man. Sure he’s helped out the big boys, and he has his cadre of super-villains, but he’s a street level hero at heart. And in an age where there are seemingly so few of those, it’s good to have him back.

The Last of Us to get comic series