It’s an arms race of epic proportions as the combiners segment of the Cybertronian populace takes center stage in IDW’s Transformers comics. 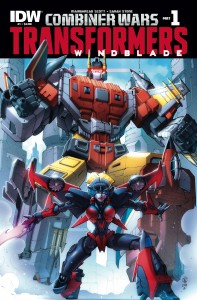 “We’re blowing the TRANSFORMERS universe wide open with this series: showcasing new characters and new worlds in a battle with some of the biggest ‘bots you’ve ever seen,” said WINDBLADE writer, Scott. “Anyone who thinks they know what to expect from a Transformers event will have to think again.”

That was one-half of the Transformers: Windblade creative team, Mairghread Scott speaking there. The other half is, of course, Sarah Stone, and the two will be serving up some of the biggest Transformers action to hit IDW’s line of comes yet.

And, according to Transformers ongoing series writer John Barber, that’s all been a part of the plan from the beginning.

“From day one of this series,” says Barber, “we’ve been seeding the mystery and power of Combiners—multiple Cybertronians who form together into bigger, more powerful wholes. Starscream realizes he needs one of his own to protect Cybertron… but why stop at one Combiner—or one world?”

To shed a little light on what he means, the event starts on Cybertron, ancestral home of the Autobots and Decepticons. With an uneasy truce still holding between the two factions, Cybertronian commander Starscream (that’s not going to be good) has decided that he needs a force of combiners to protect the home world (see what I mean?).

Combiners, for the uninitiated, are teams of Transformers who can merge into one giant ‘bot. If you remember the old toy line (or the current one), Devastator and Superion (pictured above) are combiners, and it looks like both of them will be involved in this arc. 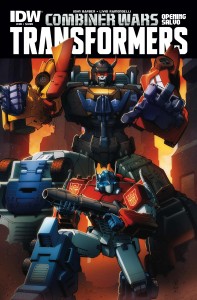 The problems arise when Starscream comes to the realization that if one combiner is good, then an army of them should be great (sounds like Starscream). As you might imagine, it’s not too hard to make the jump to conquest when you’ve got  bunch of living mega-weapons on your side.

IDW is promising that this is one that longtime fans especially aren’t going to want to miss out on, as some classic Transformers who’ve yet to see inclusion in their line of books will be making appearances. The publisher is also blowing the first issue of the standalone Combiner Wars series up with multiple covers; the standard one will feature art by Casey W. Coller, while the subscription edition will sport work from artist Livio Ramondelli from the monthly Transformers book.

And in a super-cool twist, retailers who order over 250 copies of the first issues will get their shops immortalized on the covers by penciler Travis Sengaus. Transformers: Windblade #1’s alternate will have Devastator destroying the store in question, while the Transformers #39 monthly comic’s will have Superion protecting it. In the spirit of the crossover, both books will combine into one big super-image. That’s just neat.

Combiner Wars starts in Transformers #39 and Transformers: Windblade #1 next month. Also, make sure you keep your eyes open for the line of Combiner Wars action figures from Hasbro set to hit stores right alongside the comics.