Originally released August 2011, with just two civilisations, the Egyptians and the Greeks, Age of Empires on-line was set to be an impressive multi player on-line strategy game. Sadly this games runs ended yesterday, after 3 long years.

The game entered its ‘support phase’ last year, meaning no more new content was going to be made, and also meaning that eventually the game just wouldn’t be making any more in revenue for Microsoft. Leaving no other real choice but to shut down. They posted a farewell message on the AOE blog page, thanking all the avid and loyal players and the developers for all their hard work over these past 3 years, and at the end of the games time the final stats were also posted. 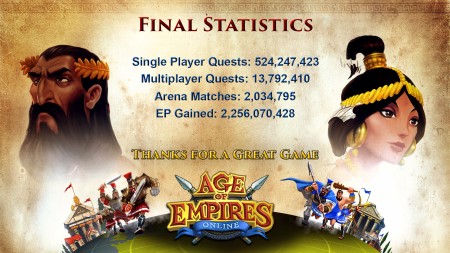 Fans shouldn’t fret too much though as there are rumours of AOE coming to IOS and Android very soon.

Related Article:  Marvel ushers in the Age of Ultron