Here it is folks, the grand finale of my Evil Dead review series. This time I will be reviewing the 2013 remake of the first film. With this film, I shall end the review series not with a whimper, but a bang… a big, bloody bang. 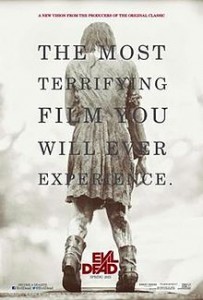 There are some major shifts in tone between the original and the remake, as you’ve probably already heard. Where the original was a campy grindhouse flick, the remake has been turned into something much darker, if not pushing into snuff film territory. I don’t have an issue with it in certain parts, but the violence can cross my thin, blurry line, particularly in the, uhm, “vine” scene.

One of the main changes this time around is gender swapped role, as opposed to the walking ball of testosterone, Ash, this time we have a drug addled girl named Mia. Mia and her brother David and friends head out to their parents old cabin in the woods. The reason for headed out to the cabin in this version is a bit less fun than the original; as I mentioned a moment ago, Mia is addicted to a drug (heroin), and the others thought that bringing her here would help free her of its grasp. What this turns into will become not so much an “out of the frying pan, into the fire” situation, but more like an “out of the frying pan, into a literal living hell” situation.

Not long after arriving, Mia starts having hallucinations; strange things in the forest, frightening images in the cabin. The others write this off, thinking it to be the responsibility of major withdrawal, but then things get worse. Convinced something is rotting, Mia searches the cabin incessantly, the others humor her and search as well, making light of the ordeal, until that is, they move a bearskin rug to find a bloodied entrance to a basement… eyup, that’s when I would leave.

Anyway, upon climbing into the basement, they find dozens of dead cats, in varying stages of rot, a burned pillar (who’s origin story is in the introduction of the movie), and the infamous Naturom Demonto, more commonly known as the Necronomicon, the Book of the Dead. One of the idiots (ironically the smart guy stereotype) cuts through the barbed wire wrapped around it (yeah, freakin’ barbed wire might be a good hint not to touch it), and then proceeds to read the pages aloud, completely ignoring the warnings marked in blood inside the book. And that’s when things start to really go downhill for them.

As far as the acting goes, while I wouldn’t say I prefer it, it is unmistakably better than the original. Now, before you all go get the pitchforks and torches, understand this- while the two movies have similarities, contrasting one against the other is like comparing a green apple to a red apple. Sure they’re both apples, but their flavors are always indefinitely different. And while you could say you prefer one over the other, in reality their flavors are too different to really consider coming from the same piece of fruit. What I’m saying is, the original Evil Dead is campy, funny, and enjoyable to watch, even though it deals with the same themes as the dark, gory, and at times horrifying Evil Dead 2013.

Musical score is absolutely amazing, I loved it throughout, but beyond that I’ve not a whole lot to say about it.

Let’s talk about controversy (you might want to skip the next two paragraphs if you haven’t seen the movie, or are disturbed by descriptions of graphic violence). This is a family friendly site, so I can’t really talk about the vine scene, and that’s okay because I would rather not. The gore in the movie is, of course, over the top and enjoyable, but sometimes breaches the barriers for me.

Seeing the main characters mutilate themselves one by one genuinely grabbed my attention, I’m not easily freaked out by movies, but something that nearly always makes me shudder is self mutilation. Personally, the scene that got me the most (with the split tongue scene drawing a close second), is the bathroom scene. During this scene, Eric walks into the bathroom to find Olivia hunched over in the corner, when she turns around, he sees the flesh of her cheek cut out by her own hands. A brief, albeit gory, fight ensues where (and this is what got me) the possessed Olivia stabs Eric in the eye and cheek multiple times with a syringe…it’s just…brutal.

All of my love for this movie doesn’t come without one or two criticisms, however. There are some terrible acting chops showcased throughout; for instance, after Mia’s first outburst, the others decide it would be best to “leave her at the cabin”. Excuse me? How is that better for her, if you leave her by herself in a cabin in the middle of nowhere? What is she going to eat, do you just expect a heroin junkie to just start a Harvest Moon farm in the woods? Uhm. No.

The other criticism: not enough Bruce Campbell. Yes that cameo at the end was amazing, and yes his presence in the movie might have made the film sillier in a sense, but I need me some more Bruce Campbell, darn it.

Overall, I think that the 2013 remake of The Evil Dead was a fitting addition to the twisted little family, even if it is sort of a black sheep. There were some wonderful homages and references, for example, the demons final words: “I will feast upon your soul!” To which Mia replies “Feast on this…”.

Do I think, critically, it was better than the original? Yes, but it is more generalized and modernized (obviously), which some, myself included, can see as a bad thing. Yes I thought it was good, and yes I enjoyed it more than the original. But if we can compare it to the second film instead (because in some ways it was more similar to the second than the first), I definitely thought the second was better.

The Shore review — Between unearthly puzzles and old gods