Last time, Barry and Kara were ‘kidnapped’ and trapped in their minds, in order to learn a lesson that revolved around the power of love.
This brought their relationships closer. Let’s see how it helps the team in The Flash Abra Kadabra.

If you missed our last review, you can find that here.

We open with a couple of security guards talking about the need to find a new job, and having no idea what some of their equipment is. Then we meet a blond haired magician appears, with plans of taking some of the inventory off of their hands. The magician manages to switch an artifact with the guards, so they are trapped in a display, and off he goes. What sort of deviousness is headed for the speedsters now? 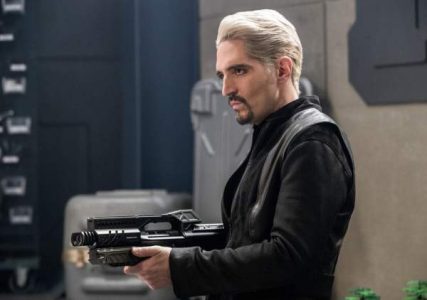 Barry, Iris, Joe and Cecile are having coffee, making future plans as couples tend to do. A future date comes up that makes everyone but Cecile grimace, pondering what life will be like for the team at that point in time. They quickly recover, and Barry tells Cecile that everyone will be in attendance that night. Meanwhile, Cisco is back at Star Labs trying to determine if anything the team has done, will have an effect of the future reality.

Nothing has changed so far, so they begin to break down what they know, and how they can approach what they have yet to learn. Julian and Caitlin’s relationship continues to be strained. Julian had bought opera tickets for Caitlin to attend her first performance, though now he would rather she take someone else to the event.

Barry, Julian and Joe are on-site of the magician’s heist. There is no logical explanation for how the bodies got in the case, or how it was filled with water. There is no water service to the area. And more than that, there is no video surveillance to be checked. These guys don’t yet have a clue.

Hearing of a second heist, Barry suits up to meet the latest crook of Central City. The thief is impressive, stating that he is from the future. He knows all about Barry Allen, Savitar, and even the doomed Iris West. Before Barry can grab the thief, he is able to place prosthtetics in Barry’s grasp, aiding his escape. However before the magician can reach the door, Gypsy appears and begins to level the playing field. This trickster’s moves continue to be quicker than Barry, as Flash’s speed is unable to even view where he escapes to, amidst a scattered deck of playing cards.

Lucky for Team Flash, Gypsy at least knows a little bit about the guy she is chasing. He calls himself Abra Kadabra, and they believe his speed is related to nano-technology, however this is only a theory. He is from the 64th Century, and is near the top of Gypsy’s top most wanted list. So while they don’t know the specifics of what he is after, or why, they are beginning to put puzzle pieces together.

Cisco is glad to be back in the presence of Gypsy, focusing on his crush after their kiss last time. When he uses Star Lab tech to search for Kadabra, Gypsy mentions she wishes she had such tech on her Earth. Cisco tries to bundle a trip to Earth-19 with some tech and some alone time with his favorite girl, but Gypsy’s not feeling the attention.

The team gets called out to a Kadabra sighting, this time with Barry, Wally, Cisco and Gypsy planning on cornering the trickster. Sadly, he had outplayed them all, as his presence is merely a hologram. Kadabra reappears at Star Labs, turning Joe’s sidearm into a water pistol and blowing up the desk before anyone else has a chance to try anything.

While Kadabra is distracted with disarming Joe, Caitlin is able to get word to Barry. He appears in time to put Kadabra in restraints. Kadabra offers information on Savitar’s real identity in exchange for his freedom. And before they can continue any further, Gypsy appears, demanding Barry turn over the trickster. Both heroes have a reason for detaining Kadabra, and it takes a bit of negotiating to see who gets first crack at him.

Rock and a Hard Space

Team Flash has an incredibly difficult decision to make: Free Abra Kadabra and gain the key to saving Iris West, or turn Kadabra over to Gypsy, retaining the ally but dooming one of their own. This is an impossible choice, as someone’s heart will be broken. Is there any good side to having a thief like him out on the loose? If they condemn Iris, the team will implode. How do you make such a decision?

It comes down to the family father, Joe West to make a deal with the devil. There has to be a way to work through this. Though before Joe got the information he so wanted, Gypsy intervened and gave the trickster the distraction he needed to slip away. He finds Harrison Well’s concealed room, and a hidden nook containing an orb of unknown importance. That certainly cannot be good. When heading for the elevator, Joe and Kadabra face one another again. The trickster claims that both sides have altered the terms of their agreement, and releases another grenade inside the lab, to aid his getaway. 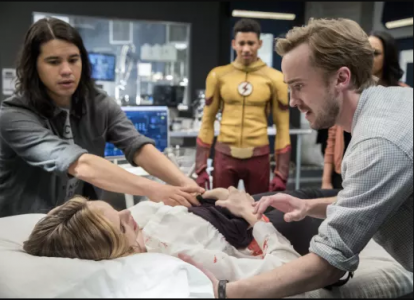 Caitlin Snow was injured in the blast. Now she faces the decision of releasing her meta abilities or aiding another to perform surgery on her behalf. Caitlin refuses to release the ice queen inside, so she trusts Julian to be her hands. Joe and Gypsy get into a shouting match over who’s responsible for the trickster getting away. We learn that the reason Gypsy wants this man dead so bad is that he killed her partner several years prior.

Julian is able to bring Caitlin through surgery, and they figure out that Abra Kadabra is using all this stolen tech to assemble a time machine. It’s all hands on deck to stop this trickster from jumping to the future. With the help of speedsters running through wormholes and Barry’s ability to phase through matter he is able to stop Kadabra before he slips away, again. Gypsy apprehends him, making sure he will not get away again. He tells Barry that now he’s been arrested, he will not divulge Savitar’s information, and Iris will die.

As Gypsy escorts Abra Kadabra toward the vortex, Barry decides that he has nothing to offer the trickster. He keeps his head held high, and appeals to the man’s sense of family. Surely he has family and friends of his own, that he would feel the same way for. This petition falls on deaf ears, and the trickster claims he’s late for an execution. He tells us a little about Flash’s enemies over the years, and how this makes him feel like he is a part of the list of ‘big bad’ villains.

This brush with death brings Caitlin and Julian’s relationship to a head, where they finally kiss after she comes out of sedation. Barry tells Joe and Iris that all these villains know what will happen because they are from the future. Barry is going to run to the future, in order to figure out a way to stop Savitar and save Iris. Amid a light-hearted conversation with Cisco, Caitlin begin seizing. Caitlin flatlines and is not responding. In a last ditch effort, Julian rips the necklace from Caitlin’s neck, allowing her meta powers to heal her. This however, brings a fully-powered Killer Frost back, and she fires a blast that knocks back everyone in the room. Caitlin is a thing of the past, welcome to the era of Killer Frost.

This is a rough episode, one that it is difficult to feel good about anyone. Cisco and Gypsy are at odds, Julian and Caitlin are on the rocks. The episode opens with the foreshadowing of whether or not Iris will be alive to go on a double date. Abra Kadabra is one of the first villians we’ve seen where they truly need an outside influence to even put them within range of stopping the bad guy. While things work out alright in the end, this had a more depressing feel than we’re used to with CW. While I am a fan, it is great to see things take a little turn like this, showing that the characters will have to face overwhelming odds if they are going to overcome what is ahead of them.

South of the Circle review — I can’t change what happened